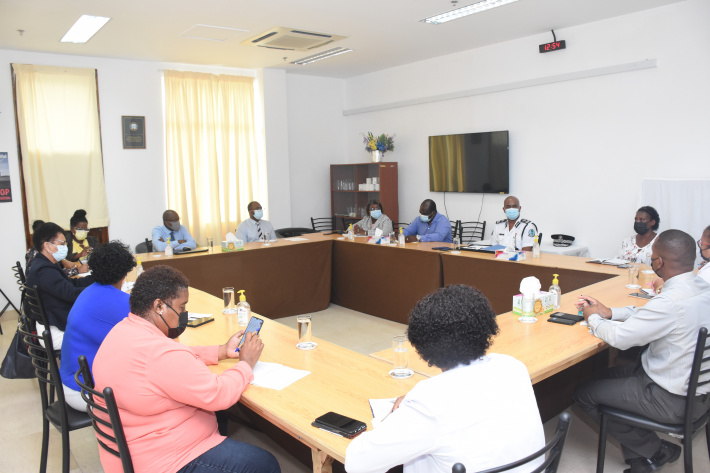 The Women’s Parliamentary Caucus in the National Assembly is continuing with its meetings with stakeholders involved in children’s rights and child protection, in regards to the proposed Sexual Offences Bill and the report on enhancing Child Protection in Seychelles by the Child Law Reform Committee (CLRC), headed by Dr Mathilda Twomey.

The committee, chaired by Honourable Regina Esparon, yesterday met with the Commissioner of Police (ComPol), Ted Barbe. He was accompanied by Inspector Agnes Labiche and Inspector Natasha Derjacques.

Also present at the meeting was Christopher Lespoir, a representative of ‘Community Crime Watch’ who had already met up for discussion with the Caucus but was invited again as the Caucus wanted to understand more on links and issues related to the collaborative work the organisation does with the police.

Following the meeting, Honourable Esparon said that again the committee has been able to get useful information to help in its deliberation when the law comes before the National Assembly.

She added that the committee will be calling next on the Office of the Attorney General.

Inspector Labiche said the police will continue to prevent, detect, investigate, prosecute and assist victims of abuse, including children.

She said that the main challenge in child abuse cases is lack of cooperation by some parents who refuse to admit that their child has suffered such abuse.

She called on those parents to listen to complaints of abuses made known to them by their children and to report such incidents to the police.

She noted that apart from physical abuse, many children are suffering from abuses via the internet.

She urged parents to be on guard as to what their children are doing on the internet.

Mr Lespoir said his organisation is happy to have had the interest of the National Assembly in regards to the work being done with regards to child abuse issues, among other related crime preventions.

He said that they will continue to collaborate with the National Assembly, the police and other partners in sending a strong message against child abuse for everyone to understand.