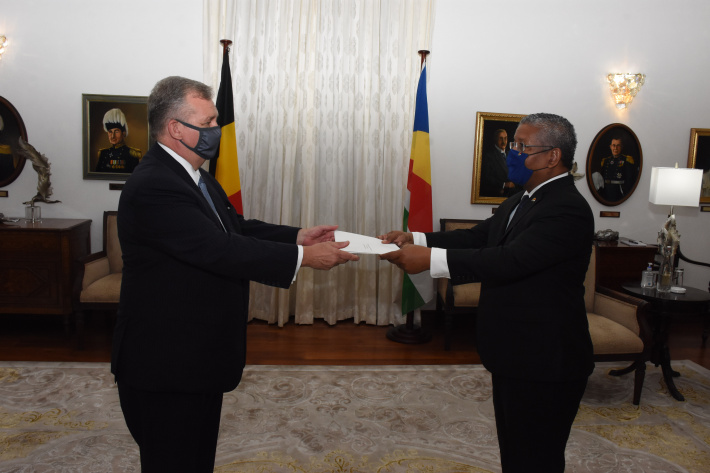 Peter Maddens, ambassador of the Kingdom of Belgium to the Republic of Seychelles, yesterday presented his credentials to President Wavel Ramkalawan at State House.

Speaking to the press after meeting President Ramkalawan, Ambassador Maddens said they discussed the years of political dialogue that exist between the two countries, the past and present challenges of our tourism sector and the way to go forward amid the pandemic, the importance of the education sector and the foreign policy, among other issues.

“The kind of relationship between Belgium and Seychelles almost feels like it’s at the same time satisfying and disappointing. Satisfying because the relations are so normal that there is hardly any ‘contention’ they say in French, between us but at the same time it’s incredibly challenging because we have no problems.

“As diplomats, we have very few things to negotiate and to talk about,” said Ambassador Maddens who noted that the relationship between the Kingdom of Belgium and the Republic of Seychelles is like that of two brothers in harmony.

Ambassador Maddens is the 14th ambassador of the Kingdom of Belgium to the Republic of Seychelles. He replaces Nicolas Nihon who was accredited to Seychelles on October10, 2017. He will be based in Nairobi, Kenya.

Seychelles and the Kingdom of Belgium established diplomatic relations on July I, 1976.

Interview with President Wavel Ramkalawan on the first anniversary since taking the highest office   ‘We are on the right track for the next four years’ |26.10.2021