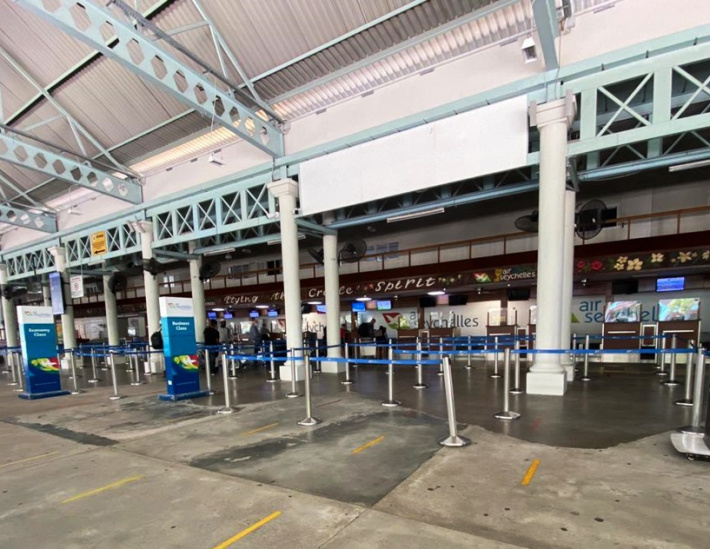 The international concourse area as it is now

The Seychelles International Airport’s public concourse area is to get a new facelift as the Seychelles Civil Aviation Authority (SCAA) embarks on a project to improve the overall appearance of its main public space under the international terminal.

This project, which is starting today, Monday October 4, is being undertaken by local construction firm Hari Builders at the cost of R7.7 million.

Works will entail the installation of a new suspended ceiling as well as fans to improve ventilation under the concourse and placing of tiles on the existing concrete floor.

SCAA’s manager for airport infrastructure and contracts, Keith Arnephy, explained that the refurbishment works at the international passenger terminal is in line with the authority’s continued efforts towards improving the airport’s facilities.

“In recent years, SCAA has completed the new domestic terminal, the refurbishment of the international arrival lounge and the improvement to our internal roads and parking facilities. Upon completion of the concourse’s refurbishment works, we aim to impact positively to the passengers’ experience at the international terminal.”

He added that “the works are to be implemented in several phases. In each phase, works will be conducted within hoardings as much as possible in order to reduce the impact on passengers and airport operations.”

There are certain parts of the concourse that will not be closed off as it will have a significant adverse effect on airport operations and movement of passengers. To mitigate such inconvenience for airport users these works are to be carried out during off-peak or closure hours of the airport, which is around 11pm to 5am the following day and that is during week days only.

However, the day-time and night-time working hours may change to accommodate changes in the flight schedules, as and when required.

In preparation for the phasing of the works, internal consultations have been conducted in order to mitigate as much as possible the impact of such a project on the airport operations.

External stakeholders including members of the general public will receive updated and timely information about the project on SCAA’s website and digital platforms as well as in the media.

SCAA is counting on the cooperation and support of all airport users during the renovation.

The concourse project is expected to be completed by the end July 2022.