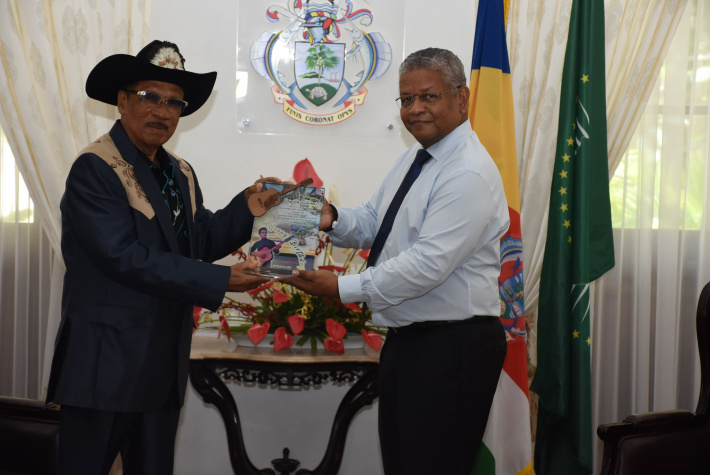 On the occasion of his 77th birthday, renowned singer from La Digue, Despilly Williams, met with President Wavel Ramkalawan yesterday at State House with his family where he received an award for his achievements and contributions to the local music scene.

Also present were the Mayor of Victoria, David Andre and Special Ambassador for Culture, Patrick Victor ‒ both musicians and friends of Mr Williams.

Mayor Andre noted that the main reason of the audience with the president was to wish Mr Williams happy birthday and to recognise his contribution in the history of music.

Mr Williams was the first singer to record songs in Creole at the Radio Seychelles in 1966.

“The president congratulated me for being the first singer to sing in Creole on the Seychelles radio in 1966 and I recounted to him I was beaten for singing in English back then ‒ a guy punched me under my chin and I will never forget. Back then it was dishonourable to sing in Creole, French and English were preferred,” stated Mr Williams.

“Nonetheless I continued to sing in Creole; even though I was insulted I never stopped. I will never forget all those who helped me during that time.”

Mr Williams noted it is the first time that he is invited to meet with a president at State House although he has performed for previous Seychelles presidents.

In his audience with the president, Mr Williams entertained President Ramkalawan with stories from his journey in the entertainment industry and his successes, from playing for visitors onboard the Lindblad Explorer to cowboy shirts he received as gifts from fans.

Mr Williams added that he was also one of the first Seychellois to perform in a show in Seychelles, performing at the Stad Linite and across the country.

Now that he is 77 years old, Mr Williams said he will never stop singing although dancing has become more difficult with age.

Mr Williams has offered to join together with other Seychellois singers to perform at the State House sometimes near the end of this year for the president. 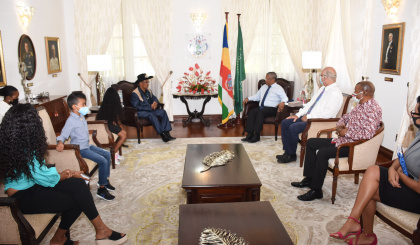 The meeting between President Ramkalawan and Mr Williams in the presence of Mayor Andre, Ambassador Victor and Mr Williams’ family (Photo: Louis Toussaint)