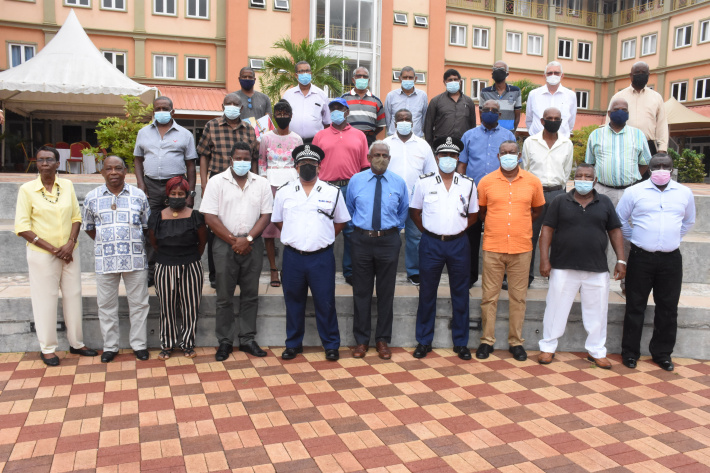 The awardees in a souvenir photograph with Minister Fonseka (Photo: Louis Toussaint)

Having gathered loads of experiences throughout their long accumulated years of service, local retired police officers are being encouraged to become mentors, coaching the new generation, giving flexible support to help their professional development.

Minister for Internal Affairs Errol Fonseka made the statement yesterday during a special award ceremony where a group of retired police officers, along with the force’s support staff were recognised for their years of service which varied between 47 and two years.

It is to note that some of the officers have way more experience in the police force but were previously made redundant, before being re-instated following the appointment of Kishnan Labonte as the Commissioner of Police (ComPol) in October 2017.

Yesterday’ ceremony which took place at the Harbour Café and was attended by ComPol Ted Barbé, Deputy ComPol Ron Bonnelame, along with senior officers, was part of the force’s calendar of activities to commemorate this year’s National Police Day which is on September 21 (today).

Minister Fonseka noted that all the accumulated years of experience combined add up to loads and loads of know-how that should be passed on to the next generation law enforcing officers.

He commended ComPol for proposing a continued interaction with the retirees through various forms, or forums where their brains can be picked in the benefit of the new generation of officers.

Minister Fonseka also thanked the officers and support staff for their contribution, commitment and resilience throughout the years and also for their future roles in mentoring the new officers.

This, he said, will be a much needed asset in the quest for the new drive and energy required by the force to deal with the ever growing trend in crimes and other challenges.

National Police Day is celebrated worldwide – on the country’s chosen date – to remember the sacrifices that the men and women in uniform make as they provide safety to all.

In Seychelles, the day is normally celebrated on September 21 to coincide with the International Day of Peace.

On behalf of the retirees, Philip Cecile, who retired in the rank Chief Superintendent after 46 years of service, advised the younger officers to adopt a culture of good work ethics throughout their career, along with a well-maintained disciplined approach as prescribed by the Police Force Act.

He also encouraged school leavers who feel that they have the discipline, devotion and will to join the force, thus making a great difference by being part of team responsible to maintain the country’s law and order.