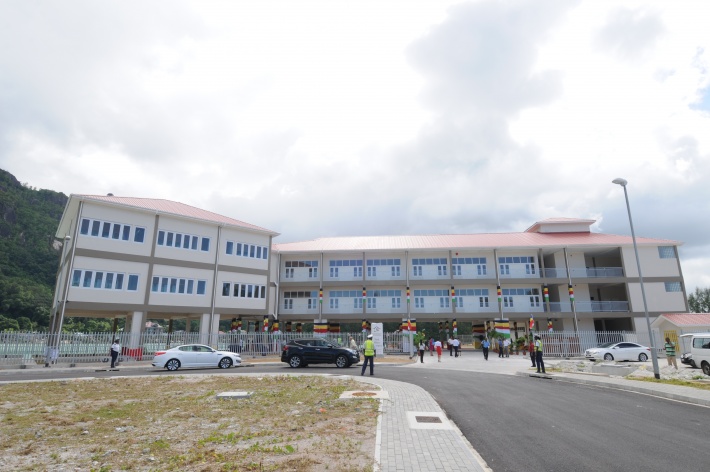 The micro-enterprise centre at Providence was opened in June 2015. Government has plans to build such centres in each district

An enterprise centre in each district, reveals VP Meriton

The government is planning to construct an enterprise centre in each district to cater to the demands of entrepreneurs and small businesses, Vice-President Vincent Meriton revealed yesterday.

Vice President Meriton said this when he appeared before the National Assembly yesterday during its morning session to answer questions pertaining to his office.

These questions touched topics related to the departments of information, communication and technology, foreign affairs and industry and entrepreneurship development.

Development of land for commercial use and enterprise centers

This statement follows subsequent questions that were asked after the member for Port Glaud, Egbert Aglae, had asked whether the government was considering providing commercial land for small businesses in his district.

In response to Honourable Aglaé, VP Meriton noted that the government has the intention of putting an enterprise centre at the disposition of these businesses in Port Glaud.

A parcel of land of around 2,159 square meters has already been identified for the construction of this enterprise centre in Port Glaud.

VP Meriton also explained the reasoning behind why the government is not in a position to provide small businesses with a parcel of land for commercial use on an individual basis.

“Land is a resource which is in great demand and which is very limited. In fact, many discussions have taken place in the National Assembly on this subject. When it comes to small businesses, the government has started an exercise with other partners, in particular the ministry responsible for land, to identify plots of land in each district, where we can create enterprise centres to maximise the areas we have at our disposition and meet the demands from entrepreneurs,” he noted.

In relation to the commercial development of Ile Eve, on Praslin, VP Meriton noted that the department of infrastructure is in the process of finalising the design for roads and drainage system estimated to be almost 2.9km.

He noted that land on Ile Eve will be leased out to companies based on various parameters such as length of application, proof of financing, nature of business and sustainability.

Areas of priorities for development on Ile Eve include sectors linked to value addition, manufacturing and processing.

19 Seychellois in detention in countries around the world

With information gathered from family members and certain Seychellois detainees, the department of foreign affairs is currently aware of 19 Seychellois who are being detained outside of the country.

VP Meriton announced this yesterday although he did acknowledge that it is quite likely that this list is incomplete due to the fact that, under the Vienna Convention, prisoners have to consent to their information being revealed.

The majority of the prisoners on this list are being detained on drug trafficking offences.

VP Meriton added that there is also a Seychellois currently on bail in South Africa, again, for the alleged crime of drug trafficking.

“Steps have been taken to allow the detainees to continue their sentences in Seychelles. In the case of the inmates in Egypt, negotiations have been ongoing since 2014 to allow the three prisoners to continue their sentences here. Our last communication with Egypt was in December 2018 where we submitted our comments on an agreement with the government of Egypt,” VP Meriton remarked.

“We have done a lot, through our embassy in Addis Ababa [Ethiopia] and we have also made political interventions on the highest level. We have yet to complete an agreement but through diplomacy we have been able to negotiate their sentences from death to life imprisonment instead.”

According to Hon. Ferrari, information concerning this official visit was seemingly secretive.

“The president does not hide anything; press releases were sent out and the delegation did not sign any agreements. We are doing things above board and if there are any agreements that take place here or elsewhere Seychellois and the National Assembly are informed of them,” VP Meriton replied.

He further noted that diplomatic ties between Seychelles and Saudi Arabia have strengthened since it was established in 2000 and that the two leaders discussed on ways to further consolidate these relations.

“President Faure thanked the king for Saudi Arabia fund’s role in the development of infrastructure in Seychelles. In fact, this fund is helping finance PUC’s project to reinforce its distribution of power in south Mahé[…]”

No agreements were signed during this official visit and the visit was not facilitated by any investor from Saudi Arabia, VP Meriton stressed.