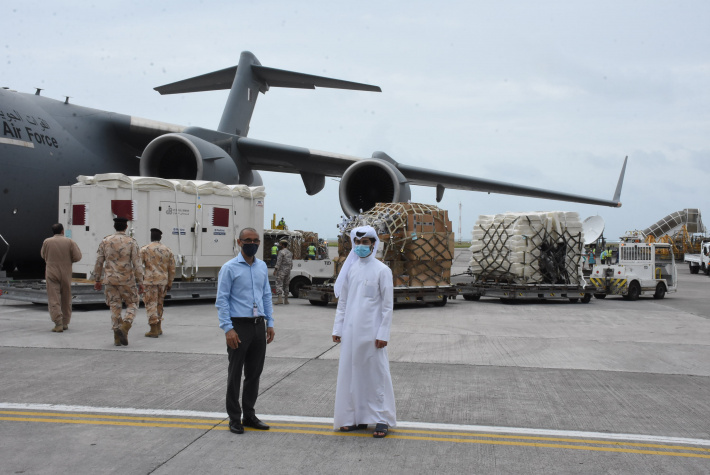 It was the chief executive of the Health Care Agency, Dr Danny Louange, who accepted the equipment on behalf of the Seychelles government from Humanitarian Researcher for the Qatar Fund for Development Yuosef Ahmad Al-Mulla (Photo: Louis Toussaint)

In case of a sudden surge in the local Covid-19 cases, the Ministry of Health will be better equipped to deal with the situation, in terms of admission and care with a new mobile hospital which is expected to be fully operational during the coming week.

The new facility, which will be erected at the Seychelles Coast Guard base at Perseverance, is a gift from the State of Qatar.

Building materials for the hospital, along with all other needed equipment and accessories, as well as manpower for the project arrived in the country yesterday on board a special flight by the Qatari Emri Air force plane.

It was the chief executive of the Health Care Agency, Dr Danny Louange, who accepted the equipment, which include a back-up generator, on behalf of the Seychelles government from Humanitarian Researcher for the Qatar Fund for Development Yuosef Ahmad Al-Mulla.

Accepting the donation, Dr Louange thanked the State of Qatar and noted that it is a privilege to receive such a gift, especially during a time when we really need additional facilities and resources as stand-by in case the country faces a situation, similar to the one experienced earlier during the year.

He also expressed his gratitude regarding further assistance in terms of manpower to work on the project, along with medical professionals who are also in the country as part of the project.

Dr Louange also expressed gratitude to the Ministry of Lands and Housing for its assistance in realising the project.

He explained that the new facility which is equipped with thirty (30) ventilators will accommodate sixty (60) patients.

Regarding human resources to run the new hospital, Dr Louange said the plan is to use it as a back-up, or stand-by hospital in case of a surge, while it will be used to accommodate mild to moderate cases.

A function which he said does not require a lot of human resources, compared to Family Hospital which provides intensive care, or high dependency services.

On behalf of the Qatari government, Mr Al-Mulla commended the excellent bilateral cooperation between the two countries and noted that the new facility will be equipped with everything to deal with any eventuality.

The Qatar Fund for Development (QFFD) is a government entity in the State of Qatar, which is responsible for Qatar's international development and foreign aid, and was established by Law 19 of 2002.

The QFFD also coordinates Qatar's charitable and development institutions and the Director-General is Khalifa Jassim Al-Kuwari.

In May 2017, the QFFD met with the United Nations Educational, Scientific and Cultural Organisation (Unesco) to discuss the latter’s Heritage Emergency Fund, which the QFFD helps fund, though other areas of cooperation were also incorporated into the discussion.

Qatar has also pledged to help Rohingya refugees in Malaysia using the money from the QFFD.

According to the Organisation for Economic Co-operation and Development (OECD), Qatar provided US $534 million official development assistance in 2020. 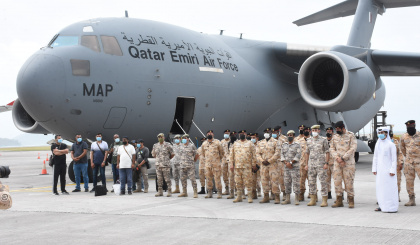