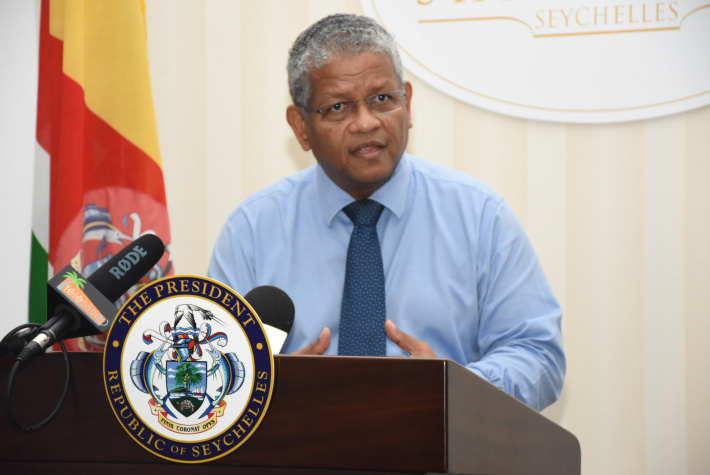 The consignment of 35,000 doses of Pfizer vaccines donated to Seychelles by the American government through the COVAX programme is set to arrive in the country this morning to officially kick off the vaccination campaign for children aged 12 to 17 and other vulnerable target groups in the population.

Making the announcement yesterday afternoon at State House, President Wavel Ramkalawan noted that the government managed to successfully acquire the specialised fridge in which to store the vaccines at the required -70 degrees temperature. While the vaccines are donated, Seychelles has had to account for transportation costs.

The consignment of vaccines will first be administered to children between the ages of 12 and 17 as previously announced with the consent of their parents and guardians. Once the population of minors are covered, the programme is set to continue with the administration of vaccines to vulnerable persons, that is, individuals with underlying medical conditions.

“After we receive the first consignment, we will receive another consignment of 30,000 Pfizer vaccines, and the idea is to administer booster doses to the population. So, we are entering this programme to invite our whole population to receive a booster dose,” President Ramkalawan added.

“The idea is for us to acquire more and we have a generous donor who is willing to make another donation. Therefore, our whole population who has been administered the Sinopharm, Covishield and the Sputnik V vaccines will receive a booster dose. As I mentioned, the booster dose is very important to raise the level of protection,” President Ramkalawan stated.

The President went on to express satisfaction at the national immunisation campaign which officially kicked off in January which saw himself as head of State receiving the first dose of the Sinopharm jab. As a result of the campaign, fewer people are being hospitalised as compared to the months of May and June. President Ramkalawan has once again called out to other members of the population who are yet to be vaccinated to seize the opportunity to do so, in their own self-interest and that of the country in general.

He however also seized the opportunity to inform the population that he has since received both doses of the Pfizer vaccine, after an antibody test indicated that his antibody levels had dropped.

“With all the vaccines, they are discovering that after a certain period of time, the quantity of antibodies which provide the protection is lowered. Therefore it is important for us in Seychelles to conduct this research to see where we stand. It is important to note that with regard to Sinopharm, I will once again repeat that it is a good vaccine, just as any other vaccine. And together with Covishield, Sinopharm has helped us. Now there are certain European countries that were rejecting Sinopharm and Covishield, who are now recognising these vaccines,” the President remarked.

“In the Ministry of Health research to assess the level of antibodies, I was able to, on one of my voyages to test and effectively, the level had dropped. And, I had the possibility of getting the Pfizer vaccine, so I took the Pfizer vaccine, and during my last visit, I had the possibility to have another test to determine the level of antibodies and I can confirm that it has significantly increased, meaning the level of protection is significantly increased,” the President explained.

Having received the Pfizer vaccine, the second dose of which he took on Sunday, President Ramkalawan will be able to attend the Conference of Parties (COP) 26, to be held in Glasgow, Scotland in November.

It is important to note that numerous countries are moving towards booster vaccines and doses, including the United Arab Emirates (UAE) and Israel.

In concluding his address, the President once again reiterated his message for citizens to opt for the vaccines which are easily available and accessible so that we can gradually return to a sense of normalcy as it is the case in some other countries such as England.

Considering plans to extend the campaign and cater for booster shots, President Ramkalawan also urged that sponsors and donors support government in its efforts and donate to the national Covid-19 Relief Fund.

Seychelles affirms its commitment to the UN Food Systems transformation   |25.09.2021

20th anniversary of the adoption of the Durban Declaration and Programme of Action |24.09.2021