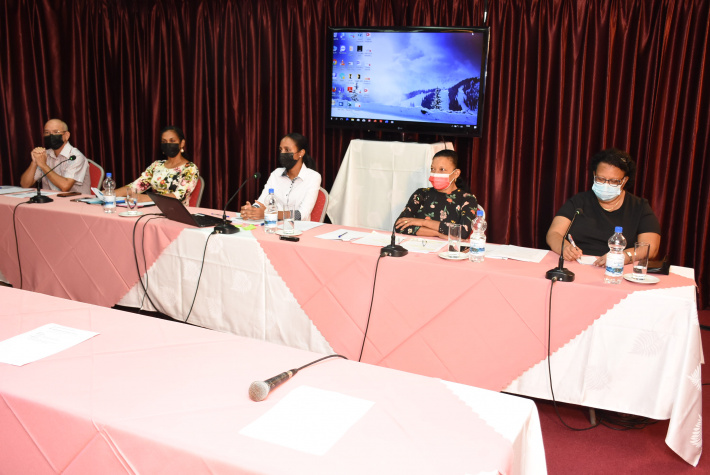 The panellists during the press conference (Photo: Jude Morel)

The Seychelles Qualifications Authority will now be better equipped to carry out its duty which is to promote the quality and standards of education and training through a system of accreditation, validation and quality assurance.

The new Act will enable the SQA to absorb new responsibilities, precisely those of the dissolved Tertiary Education Commission (TEC) within the Ministry of Education whose roles overlapped with those of the SQA’s.

In a press conference held yesterday at the International Conference Centre Seychelles (ICCS), chief executive of the SQA, Fiona Ernesta, explained that the Act that has been in existence since 2006, after being approved in 2005, needed a comprehensive review.

She said, among the many reasons for the review is the recent national, regional and international developments which have had an effect on qualifications frameworks and quality assurance in education and training.

Ms Ernesta explained that another important point is that over the years, as the Act and its legal instruments were being implemented, several loopholes were identified and needed to be addressed.

She added that there have also been reforms in education as well as at national level which require that the inspection unit of the Ministry of Education is absorbed by the SQA, as well as the functions of the dissolved TEC which need to be incorporated in the Act.

Ms Ernesta also explained that Seychelles ratified several conventions on education, qualifications and evaluation of qualifications, among others, which should also be included in the Act to ensure that the country implements the clauses relevant to the functions of the SQA.

The new Act will now be brought in front of the National Assembly for approval.

The cabinet of ministers was also presented with the Tertiary Education Indicator Report for 2020 which provides an assessment of the state of the tertiary institutions for the year 2020.

The cabinet emphasised the need to review the education system to ensure that learners access quality education, and benefit from sound careers guidance in order to participate fully in the development of the country.

The Indicator Report is a yearly exercise since 2014 that the TEC undertakes in order to examine both the educational progress of the institutions and their challenges.

The report profiles the current conditions and trends in the tertiary education sector for the reporting year and that of the previous. It presents a selection of indicators that illustrate the extent to which educational achievements are attained with an approach which departs from traditional interest on learners’ achievements only.

The report has a reasonable range of indicators that are presented in a straight forward manner but are sufficiently complex to reflect multifaceted realities.

For example, it raises such issues as to why there is a record enrolment of learners in one professional centre and a lowered number in another, or why the gross enrolment rate is higher for female learners when the general population in the 17-24 age bracket is higher in terms of males.

Data from the report has potential significance for a range of users as a reference for policy makers and the institutional implementers alike and also researchers requiring data for further analysis.

On behalf of the TEC, Jean-Michel Domingue said for the last three years, the commission has been sharing the report with the cabinet in a bid to sensitise the decision makers and to also show them the trends in the tertiary sector, including professional centres and the University of Seychelles.

He explained that the reports show in a nutshell the state of health of the sector, including what is good, what is not so good, as well as what needs to be done.

This, he said, is the only way to do policy development.

Among the main findings of the 2020 report, Mr Domingue said access to the tertiary education from the secondary five to professional centres and the university has remained within the 60 to 70 percent, while the quality of training given by the institutions have improved, with more of them getting their programmes validated.

Mr Domingue also noted that progress in evidence in improvement of the graduation and attrition rate, but there is still some cause for concern with a few institutions having one out of four students who start their programmes and not finishing.

He also pointed out that institutions are getting more funding, especially for staff emoluments, but however noted that unfortunately, not enough money is being directly spent for teaching and learning.

Mr Domingue added that gender divide in the institutions remains consistent with girls outstripping the boys.