SMA on track with its localisation plan |03 September 2021 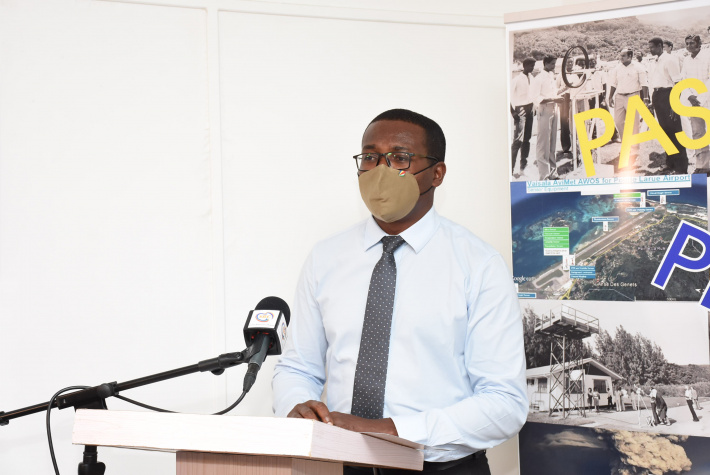 Continuing on with the Seychelles Meteorological Authority’s celebration of 50 years of its existence at the Seychelles International Airport, yesterday also saw a ceremony to present airplane tickets to two staff members undertaking further studies as well as presentation of certificates to four returning graduates.

The ceremony was attended by the Minister for Agriculture, Climate Change and Environment Flavien Joubert, principal secretary for energy and climate Rebecca Loustau-Lalanne, chairman of the SMA board Lambert Woodcock and SMA’s chief executive Vincent Amelie.

The ceremony highlighted SMA’s 10-year training and localisation plan wherein it hopes to send at least two Seychellois for specialisation in meteorology to replace the 11 expatriates currently employed at the authority.

Stephie Bistoquet and Laurent Valentin who received their airplane tickets yesterday are this year’s two recipients of scholarships, facilitated by the Agency for National Human Resource Development.

Both will be leaving for the UK during the weekend to undertake a Bachelor of Science in Meteorology and Climate at the University of Reading.

Meanwhile four employees of the SMA who graduated from university in the last five years were presented with certificates of appreciation.

Aviation meteorology is possibly the most important data stream for air traffic management services given its impact on both safety and efficiency of airplanes and passengers.

Mr Amelie explained that although a meteorologist with a diploma used to suffice, the International  Civil Aviation Authority (ICAO) has continuously upgraded its standards and requirements which now require for meteorologists to undertake university level studies.

Minister Joubert yesterday reiterated the government’s commitment to assisting SMA with its efforts to train more Seychellois to work at the meteorology station and achieve its 10-year target of replacing expatriate workers and employing only Seychellois.

“Nonetheless funding remains a challenge because we need to send two students each year in order to execute the plan and the countries where we have to send them are quite expensive, such as the UK. But we are looking for sources of funding from the Ministry of Education, through the ANHRD, and we have also started discussions with the Ministry of Transport to look at the support that could potentially come in from the aviation sector for meteorology studies. We know that meteorology plays an important role in aviation and it stands to reason that it should receive assistance from the aviation industry,” stated Minister Joubert.

The SMA also took the opportunity yesterday to present Marcel Belmont with a special award for his 47 years of service to the SMA.

Mr Belmont, who joined SMA in January 1972  at the age of 17, said that it was his continued passion for  meteorology that kept him at the authority for over four decades until his retirement in 2019. 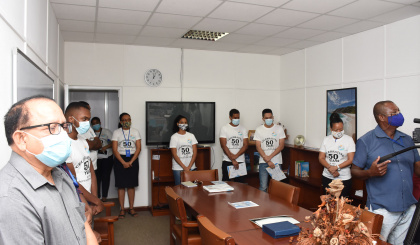 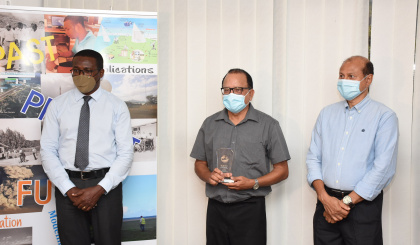 Mr Belmont was rewarded for his 47 years of service to the SMA (Photo: Thomas Meriton)