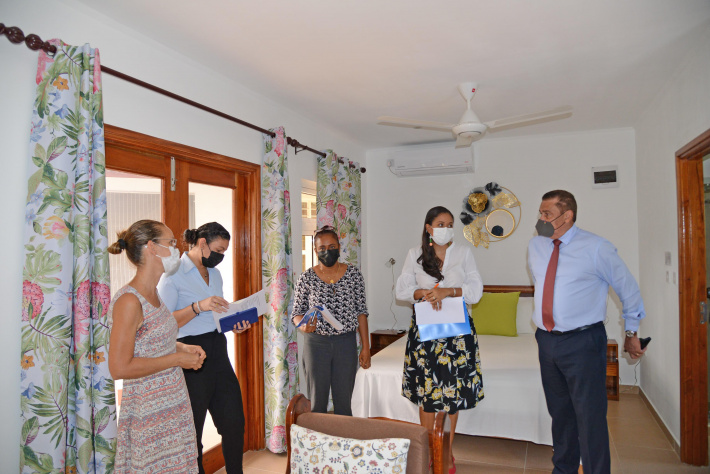 The Minister for Foreign Affairs and Tourism, Sylvestre Radegonde, made this remark on Friday during a visit of small establishments at Bel Ombre.

Continuing with his mission to better understand the tourism industry and its players, the minister on Friday visited 15 small establishments, holding discussions with their owner/managers and staff and hearing first-hand the challenges they face and advising them on the opportunities available to them. Visiting these small establishments is extremely important as they need more support than larger establishments and carry the creole charm that is often lost in big chains and resorts, Minister Radegonde said.

Creole hospitality is a prized attribute and the hallmark of smaller actors within the tourism industry, he said.

Cherished by many who visit Seychelles, this is something which visitors experience first-hand through their hosts in small establishments who make small gestures, whether it is greeting them with local beverages or treating them to a home-cooked meal, which many of them find themselves falling in love with as they discover the exotic flavours of creole cuisine.

He was accompanied by the principal secretary for Tourism, Sherin Francis, as well as the elected member of the National Assembly for Bel Ombre, Honourable Sandy Arissol.

August has been a busy month for most of the establishments visited, with many confirming that bookings are on the rise since the last phase of the re-opening of the country last March.

Speaking on how they have adapted to the situation, given the tailspin the industry went into, they highlighted that they turned to domestic tourism which has been a contributing factor in keeping their doors open.

With cancellations from international visitors becoming more frequent, establishment owners say they have adopted a more flexible approach which is bringing dividends, some guests postponing their stays instead of cancelling completely.

While many of the small tourism accommodations are receiving guests from emerging source markets, there are a handful that are still dependent on the traditional ones.

Minister Radegonde reminded them that they need to venture into markets with potential, such as Eastern Europe and the UAE, and review their marketing strategies to survive, which can be done under the guidance of the department of Tourism.

The lack of a reliable workforce is one of their major challenges, they said, with most proprietors affirming that they try their best to maintain a purely Seychellois workforce.

Although some have been successful in this endeavour, many stated that some of the local workforce is not dedicated to the industry and are unwilling to put in the required time and effort.

Danny Loizeau of Casadani pointed out that local labour is always preferable, however, once the non-workers are removed from our population, namely children, the elderly, the ones unable to work and those who refuse to, there is very little choice left and at some point, they have to seek labour from overseas.

Making more activities available for tourists within the destination was also a topic of discussion, many establishment owners finding their guests searching for things to do, an issue which Minister Radegonde responded to, reiterating that work is being done to change this as it not only gives visitors things to do but also reasons to stay longer in the destination and increasing spending, bringing revenue into the country.

Other concerns discussed included noise disturbances, pollution, littering and reduced access to the beach due to certain developments.

Despite these challenges, the establishments had plenty of positive feedback, with many proprietors affirming that the country opened at the right time, giving them a chance to survive. The destination opening up before many others gave it a competitive edge, PS Francis responded, and the country’s sensible measures made it easier and more appealing for people to travel as the country receives visitors from even as far as Alaska.

Commenting on the visits, Honourable Arissol said that he found them to be fruitful as they engaged in interesting interactions with the establishment owners, learning more about their situation and concerns, which also included GOP-related issues and unreliable workers.

He was also in agreement with Stephen Rousseau of Forest Lodge, who stated that Seychelles Tourism Academy’s education programme is fundamental to the industry and that the students need to understand that there is more hotel life which is demanding and requires sacrifice as well as passion.

Impressed by the establishments they visited, both Minister Radegonde and PS Francis commented on how some of these small establishments are presenting top quality products, paying close attention to detail and operating on 5-star standards.

The weekly visits are part of Minister Radegonde’s efforts in strengthening his relationship with actors within the local tourism industry which will facilitate his work in tackling the challenges faced by the industry under his portfolio.

The accompanying photos show some highlights of Minister Radegonde’s visits at Bel Ombre.

Press release from the tourism department 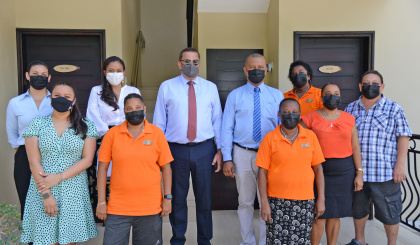 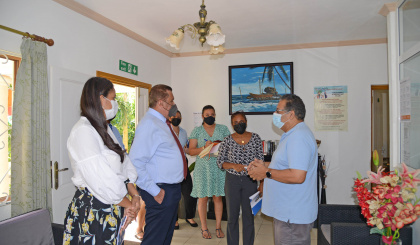