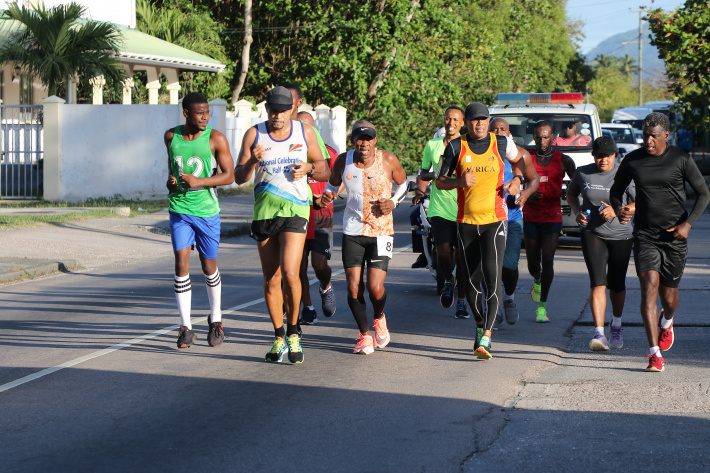 His mother Regina Melanie would have celebrated her 89th birthday yesterday, but unfortunately the renowned poet has not lived to see his son achieve such incredible feat as she would have surely penned it down ‒ in Creole.

Yesterday, long distance runner Joel Melanie completed another 21km challenge baptised ‘Mwa Retournen Victoria’ in his ‘Run for a good cause’ project, this time from Stad Popiler to Anse Royale, the district where he grew up with his family.

His time at the finish line in front of the Anse Royale community centre was 2 hours 19 minutes 05 seconds (2h19:05) and although it is his best effort over the distance, this did not matter most for him.

The 61-year-old does not run for fame or to win big purse for himself, but to raise funds for different associations and his runs are earmarked as projects.

“To family, friends far and near, athletes and each and everyone who have supported the ‘Run for a Good Cause’ projects, a very big thank you from the bottom of my heart. Your support has inspired me to continue the extra mile to give back to the community.

“Today as we commemorate the birthday of our mother, Regina Melanie, I am proud that I completed the 21km dedicated to the four associations in her honour. God bless us as we continue to dream to do good to help others. THANK YOU,” said Mr Melanie.

He added that he has worn the number 89 during all his runs this year in honour of his mum who passed away in 2016 and would have celebrated her 89th birthday yesterday.

Mr Melanie told Seychelles NATION that he woke up at 4am yesterday and took a light breakfast which consisted of two toasts with peanut butter, two bananas, some oatmeal and black coffee.

“I felt good all along during the race, but at some point I suffered from dehydration. If not for that I could have finished with a much faster time. My target is to reach the 2-hour mark, possibly next year,” Mr Melanie told Sports NATION, adding that he has amassed a lot of experience in all three races of the last phase.

“The first race on La Digue nicknamed ‘Anmenn Mwan La Digue’ started on higher grounds but I suffered to reach the finish line under a scorching sun. For the second challenge – ‘Retourn Praslin’ – on Praslin, the sun was not too hot, but I had to run uphill in the Vallée de Mai area on my way to the finish line in Baie Ste Anne.

“As for today (yesterday), I felt good until the 19th kilometre mark when I reached Pointe Au Sel. With the little steam left in the tank, I suffered to climb the Fairy Land hill and lost valuable time. But I felt good. I felt like being 16 years old,” Mr Melanie added.

A group of former long distance running champions like Simon Labiche who all remain active, as well as members of the Anse Royale Athletics Club, accompanied Mr Melanie during yesterday’s run and when he reached the Anse Royale community centre he was cheered by those present.

Youth, Sports and Family Minister Marie-Celine Zialor, Employment and Social Affairs Minister Patricia Francourt, member of the National Assembly for Anse Royale Sylvanne Lemiel, Mr Melanie’s wife Linda William-Melanie who is the principal secretary for social affairs, National Sports Council chief executive Jean Larue were among those who welcomed him home as famous singers Emmanuel Marie and Brigitte Lablache, both members of the Seychelles Association for the Blind and Visually Impaired, entertained the crowd.

Mr Melanie received gifts before Minister Zialor unveiled next year’s theme ‘We all have dreams’ of the ‘Run for a good cause’ project.