Truth and reconciliation without retribution |25 August 2021 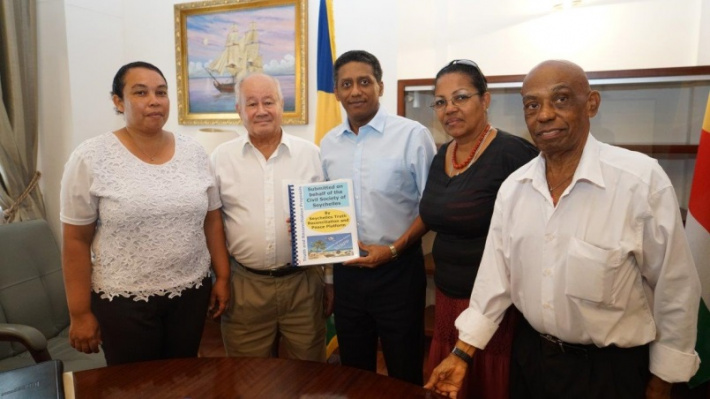 Members of the Seychelles Truth Reconciliation and Peace Platform (STRPP) presenting their 165-page report to the then President Danny Faure at Sate House on July 28, 2017

The other area of failure in some countries has been where retribution has been used as a tool of punishment for the crimes committed by the Coup D’état perpetrators.  Those found guilty were put in prison and no efforts were made to compel those who benefitted wrongly and illegally through the process and activities of the Coup D’état to give back to Peter what belongs to Peter and to Paul what belongs to Paul. The problem with sending perpetrators to jail is they cost the tax payers a great deal of money trying to adjudge and avenge the crimes they have committed. Of course certain crimes definitely require the imposition of punishment by fines or imprisonment or both to deter and reduce the level of criminality and violence in any society.

Therefore it makes sense to repossess the land and property and give them back to the rightful owners with no burden on the tax payers. In any case why should the current tax payers pay compensations to the victims for crimes that were committed during and after the 1977 Coup D’état? …..Those who have left us and gone to confess their sins face to face with our Creator have left behind gifts and inheritance that were unlawfully obtained and these must now be given back to the rightful owners under the TRNUC amnesty arrangement before the TNRUC completes it work in August 2022 and it is dissolved. There will be no more opportunities for amnesty once the TRNUC has been dissolved.

The next step before the TRNUC delivers its final report

The TRNUC will complete its mandate in August 2022 and we are now in August 2021 therefore the time has come for an Implementation Authority to be set in place to take over and implement the work of the TRNUC. The TRNUC has done an excellent job compared to other countries I have researched and day after day we have witnessed our brothers and sisters come in front of the SBC cameras and share with our nation their griefs and misfortunes and how a peaceful nation like ours could have ever dreamed we would suffer such atrocities committed by people we grew up together, we played marbles together, we shared and sucked the same “labarb tanmaren” and we shared licking the same “sikdorz” lolly on the way home from school and yet when greed overwhelmed those craving for power and self-enrichment our brothers committed rape, murder, made each other disappeared, stole each other’s land and property, forced those who would not play ball to distant lands never to return to their birth place, all this we heard and we witnessed  on our flat screen TVs in full colour. We watched our brothers and sisters break down with grief and yet they say they are willing to forgive. This is the kind of people we are made of and we are proud to be Seychellois. Now we will conclude this process the Seychellois way, we will not copy what another country did but we will learn from their mistakes, thank you very much.

The TRNUC commissioners allowed victims to pour their heart out, to tell us exactly what happened, where, when and who did what to whom and how they were victimised, devastated and hurt beyond their wildest dream with no editing and prompting and this is the strength of the process of our truth and reconciliation exercise the commissioners of our TRNUC have delivered to us for which we are grateful to them. The other aspect people tell me they like is the fact that the chairperson, Gabrielle McIntyre, is not a Seychellois, she has no ties with anyone in Seychelles, no axe to grind, no “gran kouto” to sharpen and she is a lawyer by profession and these qualities together with her professional approach has given us the best truth and reconciliation process yet to be found anywhere in the world over the last 20 years. Other countries will no doubt follow Seychelles’ modus operandi.

The Final Report of the TRNUC is very important because it must not just tell us exactly what happened but it must lay out the recommendations for compensations. It is all very well to know the truth and to try and reconcile with what happened but the truth without compensation is useless and even if retribution has been delivered it is also pretty useless unless the proper compensations have been awarded, let’s be honest, fair and realistic with each other. Closure cannot be achieved without making compensatory gestures because knowing the truth and the perpetrator saying sorry go a long way towards forgiveness but only compensation in whatever form agreed can now demonstrate the matter has been dealt with to the level of the victim’s best expectations and satisfaction and closure can be achieved when the victim’s sub-conscious mind archives the suffering deep into the victim’s memory. There are five stages of trauma and they are denial, anger, bargaining, depression, and acceptance.

An implementation, consolatory and quietus Authority, for example Seychelles Reconciliatory Honorarium Authority (SRHA), must be created as soon as possible before the end of 2021 so that its members can liaise with the existing TRNUC members to ensure a smooth handover and the new Authority must be composed of two main groups of operatives. One group will be responsible for the well-being of the victims and engage in honorarium activities to ensure that compensations are properly delivered and the other group of operatives to be made up of hardnosed forensic accountants and investigators. If we can’t find such people in Seychelles then we must recruit from overseas on an assignment or contract basis and their main function will be to recover the stolen assets and money, some of which are hidden away in off-shore bank accounts and Numbered Swiss Bank Accounts (NSBA) and some properties have already been gifted to friends, lovers and families but these assets must now be repatriated, restored and returned to the rightful owners or the right amount of compensation at today’s value must be awarded to the victims not from the tax payers but from the proceeds of the repatriated land and property. Even if someone has sold his/her ill-gotten gains and gone to live overseas there are ways to get them to give back or pay back what they improperly acquiesced or purloined unlawfully. The world is a village and no nation wants to harbour any fugitives running away from their native land with the spoils of a Coup d’état, those days are over.

An in-depth investigation into past activities of a couple of banks in Seychelles is desperately needed because money improperly left our country at the dawn of the Coup D’état which purchased land in Australia and other places and in addition we need to know what happened to the reserve the British handed over to us during our Independence. How much money did the British leave in our Central Bank as our monetary inheritance and what happened to this money and other financial transfers like the 50 million that was sent to UK and then there are other overseas private accounts transfers that took place? Furthermore we want to know what happened to the forex confiscated from Seychellois at the airport by Customs officers at check points during the “napa forex” period; where has all this money gone to and where is an account showing how much was confiscated from each travelling Seychellois?

The period for the truth and reconciliation exercise is approaching the end and now comes the restoration period which we must address with equal tenacity and willingness to accomplish our mission with a high degree of success. The Coup D’état sent us travelling backward while our society created a handful of rich and powerful people who controlled the Executive Branch, the Legislative Branch and the Judiciary. No attempts were made by the last government to recompense the victims of the Coup D’état, the time has come to give back to the people what belongs to the people. A well-managed honorarium authority can achieve our expectations without retribution and only then will our nation achieve closure. We thank you oh Lord for our success thus far and we ask for your guidance during the coming final stage of restoration.