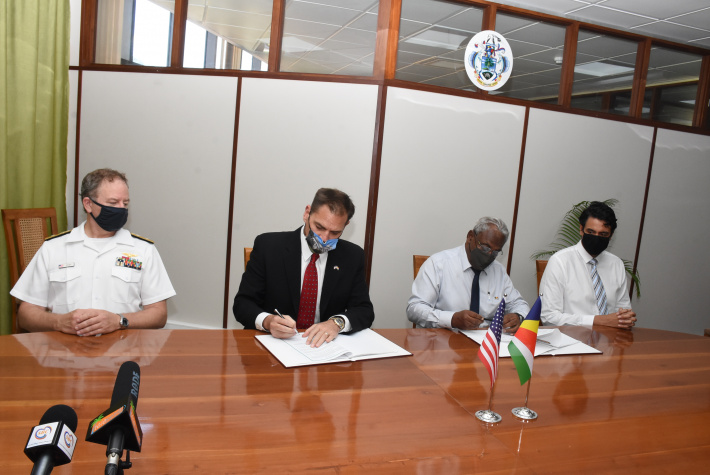 The United States and Seychelles governments’yesterday afternoon signed a bilateral maritime law enforcement agreement, the first with an African partner nation in the Western Indian Ocean.

The new agreement will enable the United States and Seychelles to strengthen their shared maritime governance by detecting, identifying, combating and preventing illicit transnational maritime activities.

Minister Fonseka noted after the signing that the Indian Ocean region is host to various illicit maritime activities such as piracy, illegal unreported and unregulated (IUU) fishing and drug trafficking.

“These criminal activities are directly impacting and impinging on not only the sustainable development of Seychelles, but equally on the stability of the Western Indian Ocean region. Fully aware of the complex nature that Seychelles faces in detecting, deterring and suppressing illegal activities at sea due to our immense maritime space, it is of no surprise that we are here today to sign the maritime bilateral agreement to counter illicit transnational maritime activity operations,” said Minister Fonseka.

Through this agreement the United States andSeychelles will strengthen the global network of like-minded partners countering these challenges to maritime security.

This agreement also represents a significant milestone in the United States-Seychelles bilateral relationship.

The US Embassy’s acting deputy chief of mission Thomas Kohl reminded everyone present that in his message to President Wavel Ramkalawan on the occasion of Seychelles’ Independence Day in June, US President Joe Biden said: “We value our two countries’ cooperation in regional peace and security efforts.”

He further noted that this agreement was made possible through the hard work and collaboration of many individuals from both the Seychelles and the US governments.

“We have always recognised Seychelles as one of the most active and willing maritime security partnersin this region. But we knowtoo, that neither the United States nor Seychelles can assure regional peacealone. We acknowledge that only together can the threats of our time be defeated,” Mr Kohl stressed.

US Naval Forces Africa and the US Coast Guard have developed a close partnership with the Seychelles People's Defence Forcesand this bilateral agreement re-affirms the commitment by both governments to further strengthen cooperative law enforcement activities.

Currently we already have the French naval forces in our seas and with the US naval forces, Seychelles’ hope is to have better protection of our region. Both forces will work independently.