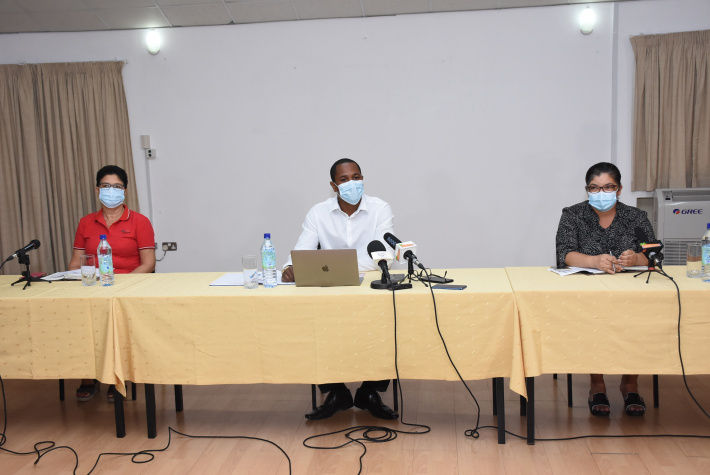 The Seychelles Trading Company has a buffer stock of essential goods enough to sustain its supplies to consumers until December and it has reassured the public that there is no need for panic buying.

Seychelles Trading Company (STC) deputy chief executive David Jean-Baptiste saidthis yesterday when he gave updates onthe delay in some of the company’s shipments due to some current shipping challenges.

He explained that the delay in shipment is across the board, affecting not only Seychelles and the STC, but also other local importers, as well as other countries.

He said the press conference yesterdaywas to explain the situation,but not to scare people or create panic. He added that it is the company’s communication policy to informand updatethe general public.

Among the commoditiesconcerned by the delay arerice, oil, butter, margarine, toilet paper, alongside some other assorted goods.

Ms Andre explained that the issues of delay is not new as it all started with the outbreak of the Covid-19 pandemic as some limited shipping, especially during lockdown periods.

She, however, noted that the recent incident where a huge container ship disrupted global marine traffic after it blocked the Suez Canal for nearly a week in March has aggravated the situation.

Mr Jean-Baptiste explained that the delay can trigger several financial issues which could have caused anincrease in the price of commodities, but he explained that the STC has worked on several mechanisms along with several partners to ensure that this does not happen. He said this is all in line with the company’s policy to ensure a fair and competitive retail price.

He further explained that due to large number of containers entering the country simultaneously, there will also be the issue of storage which is very costly.

Mr Jean-Baptiste said the company is in negotiation with the Financial Services Authority (FSA) to rent its storage facilities at a concessionary rate, while Land Marine has already agreed to grant the STC some more time – port rental free – to clear their containers.

Another successful negotiation has been with Maersk Shipping Company, active in ocean and inland freight transportation and associated services,regarding its demurrage fees.

Demurrage is a charge levied by the shipping line to the importer in cases where they have not taken delivery of the full container and moved it out of the port area for unpacking within the allowed free days.

These agreements, he said, will ensure that the effect of the delays is not directly passed on to customers.

This, he said, will enable the STC to store, mostly perishable goods over a longer period of time, compared to the actual two to three weeks’ duration.