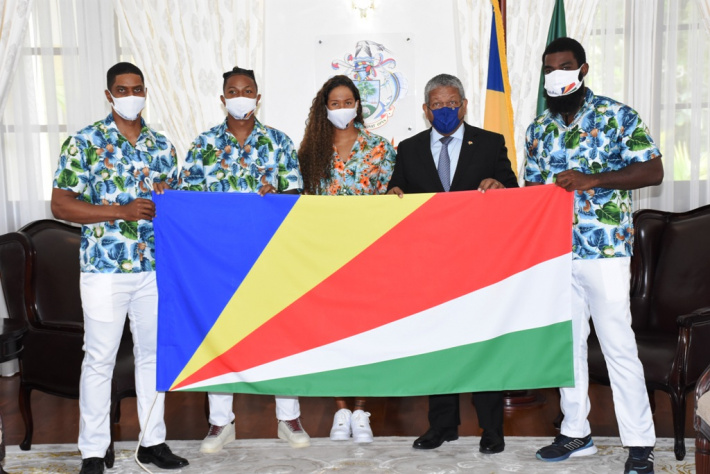 The Seychelles team for the Games of the XXXII Olympiad scheduled to take place from July 23 to August 8, 2021 in Tokyo, Japan have received the full support and blessing of President Wavel Ramkalwan during the traditional send-off ceremony held yesterday at State House.

The highlight of the ceremony was the handing over of the national flag to Seychelles’ flag bearers at the Games ‒ sailor Rodney Govinden and swimmer Felicity Passon.

The Tokyo Games will be Govinden’s second Olympiad after competing at the 2016 Summer Olympics held in Rio de Janeiro, Brazil where he was also the country’s flag bearer.

Missing was swimmer Simon Bachman who is presently in France and will meet the delegation in Japan.

Mrs Banane and doctor Rodriquez Barrios are to leave the country tomorrow, while the rest of the delegation will travel on Sunday July 18, except for judoka Finesse and coach Labrosse who will leave on Saturday.

President Ramkalwan reminded the athletes to stay focus and to try their best to bring glory and pride to the country and the Seychellois people who will be behind them.

Despite the ongoing Covid-19 pandemic which forced the Games to be postponed from last year, Mr Gopal said the Seychelles team had a choice either to take part or not, but decided to be there in solidarity with the Tokyo organising committee and the International Olympic Committee (IOC).

He added that there are various health conditions attached and the Seychelles team will abide to each and every single one of them, as well as other precautionary measures set by the organising committee.

The 2020 Olympics and Paralympics were postponed from last year because of Covid-19 and it has been decided that the Games will take place with no spectators cheering on the athletes.

The Japanese government has made the decision after a surge in Covid-19 cases in the country, while a state of emergency was declared in the Japanese capital on July 8 and will stay in place until August 22.

Most events will be in the Greater Tokyo area, although some football games and the marathon will take place in the northern city of Sapporo.

International athletes and support staff will be tested before departure and on arrival in Japan.

Athletes do not have to be vaccinated, though IOC officials expect around 80 percent will be.

Tokyo was selected as the host city during the 125th IOC Session in Buenos Aires, Argentina, on September 7, 2013.

The 2020 Games will mark the second time that Japan has hosted the Summer Olympic Games ‒ the first being also in Tokyo in 1964, making this the first city in Asia to host the Summer Games twice. Overall, these will be the fourth Olympic Games to be held in Japan, which also hosted the Winter Olympics in 1972 (Sapporo) and 1998 (Nagano).

Tokyo was also scheduled to host the 1940 Summer Olympics but pulled out in 1938. The 2020 Games will be the second of three consecutive Olympics to be held in East Asia, the first being in Pyeongchang County, South Korea in 2018, and the next in Beijing, China in 2022.

The 2020 Games will see the introduction of new competitions including 3x3 basketball, freestyle BMX, and madison cycling, as well as further mixed events.

Under new IOC policies, which allow the host organising committee to add new sports to the Olympic programme to augment the permanent core events, these Games will see karate, sport climbing, surfing, and skateboarding make their Olympic debuts, as well as the return of baseball and softball for the first time since 2008. 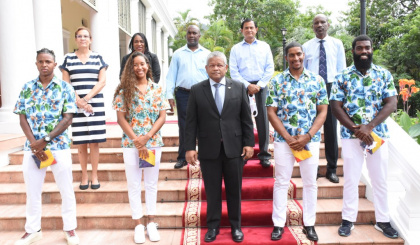