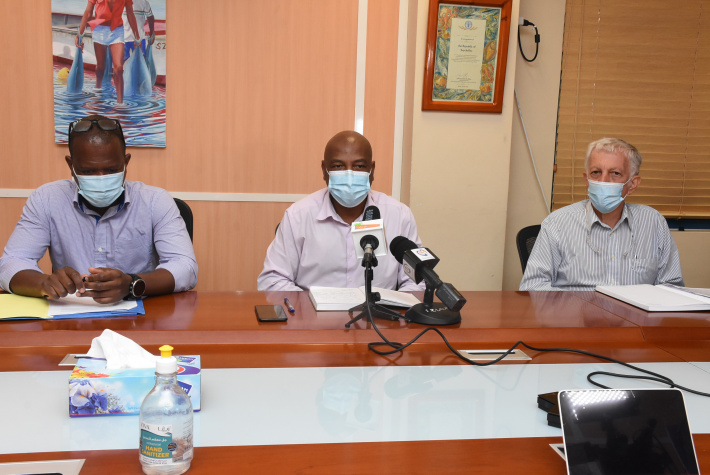 The 25th meeting of the Indian Ocean Tuna Commission (IOTC) held between June 7 and June 11 proved to be beneficial for Seychelles, with a new resolution requiring the fisheries-dependent state to reduce catch of yellowfin tuna by only 10 percent, as compared to more developed states who are required to reduce catch by 16 percent and above.

Principal secretary for Fisheries Roy Clarisse was joined by the chief executive of the Seychelles Fishing Authority (SFA) Vincent Lucas and consultant at the department of the Blue Economy Philippe Michaud, for a press conference yesterday morning, in which they provided more information about the resolutions approved and adopted by the commission during the meet.

PS Clarisse noted that a total of seven propositions were tabled, including two pertaining to yellowfin tuna, two proposals on skipjacks, one on Fish Aggregation Devices (FADs) proposed by Kenya, one on transhipments at sea submitted by Indonesia, as well as one on marine mammals, including whales and dolphins.

Only three proposals of the seven were approved, including a resolution on yellowfin tuna and management of the stock, through which Seychelles and other coastal and small-island states stand to benefit.

“The Scientific committee told us that in 2019, in IOTC, vessels caught 427,000 tonnes of yellowfin, and the committee stated that we need to reduce this to below 403,000 tonnes. In the resolution that was approved, the limit is 400,512 tonnes, which is a limit which is sufficient as it is under the limit that the commission is proposing.”

“However, it wasn’t an easy negotiation, it was really difficult as even when we started negotiations, many countries wanted exemptions. But for us, Seychelles, I can say that we came out well in these negotiations this time, where in totality, under Resolution 1901, for purse seiners, we were being asked to reduce by 16 percent. Under the new resolution, we have ensured that our situation as a small island state, and taking into account our dependence on fisheries, is taken into consideration, as our economic activities are limited. So, we managed to come out with a reference whereby we can reduce our catch by just 10 percent. Even the 10 percent, the way we negotiated, we asked that we change the reference year to 2015, for our purse seiners, we asked that they use the average of what we caught in 2017 to 2019, which resulted in us being put in a position which is favourable,” PS Clarisse explained.

Other countries, such as the EU, the biggest contributor to yellowfin fisheries, have agreed to instead of reducing catch by 16 percent, to reduce by 21 percent, for the sustainability of the species. However, five countries, namely India, Indonesia, Oman, Iran and Madagascar are objecting to the resolution.

“It was a very difficult meeting but the results are satisfactory for us, because we managed to state our position and we can ensure that our tuna industry is protected. In such situations, resources are important to protect but we also need to remember that there are commercial values and competition between different types of fisheries.”

“The fishing which is important for us is purse seiners, and our industry depends heavily on this. In fact, purse seining is more controlled than any other fishing. And the fact that Port Victoria is the most important tuna port in the Indian Ocean , whereby more than 80 percent of these vessels disembark here, it gives us an importance and control on catch, as well as many economic benefits, stevedores, transhipment, fuel and such,” PS Michaud added.

A second resolution which was approved was submitted by Indonesia, who has a special specificity in the form of wooden vessels, not recognised by the International Maritime Organisation (IMO). With the resolution, the exemption allowing Indonesia to contract independent observers for transhipments at sea on such vessels is extended.

Both the EU and Maldives tabled proposals relating to skipjack, although only the Maldives’ resolution was approved. The approval will see the development of conservation measures, a Harvest Control Rule, to ensure that countries respect the 513,000 tonne limit on catch that the IOTC scientific committee has recommended. The Harvest Control Rule provides guidance about the parameters, the biological stock levels, and the limit to which the species can be exploited, and what action to take when stocks start depleting.

On the other hand, the EU in its proposal sought that developed countries reduce the skipjack catch, as of January 2023, by 10 percent, and that less developed and small island states, including Seychelles, reduce by 7 percent, and do the same the following year. However, the resolution was met with some resistance, on the basis that industrialised countries have exploited skipjack, and that the species is not under threat.

“When the scientific committee conducted its assessment again, they determined that there were environment conditions that are favourable for the reproduction of skipjack, so that even in the coming years, 2021 to 2023, they have increased the quantity of skipjack that can be caught, from 470,000 tonnes, in the Indian Ocean, for the coming year, we can catch 513,000 tonnes of skipjack,” PS Clarisse added.

Other proposals by South Korea to have Resolution 1304 extended to include industrial long-liners, and gillnets adopted by Iran, Indian and Pakistan, was met with resistance and rejected. Resolution 1304 which was adopted in 2013 is applicable to purse seiners and prohibits the setting of purse seine nets around cetaceans, and to ensure the safe release of the species if caught, among other provisions.

Kenya’s proposal to decrease the quantity of FADs to 200 per vessel was also rejected.