‘Au Fon Lanmal’ Facebook group:Connecting Seychellois all over the world to home |10 June 2021

Social media groups usually attract a large following, and have the potential to grow into movements and something bigger and more meaningful than when they started. It is precisely that objective to which creators of the ‘Au Fon Lanmal’ Facebook group, Claude Bonte of Beau Vallon and Eleonore Scharfenberg work to.

Started in October 2020, ‘Au Fon Lanmal’ has spread like wildfire, quickly gaining popularity and growing in membership over the months. To date, the group dedicated towards helping Seychellois living abroad and those of Seychellois origin to learn and relive the history, culture and heritage of Seychelles has attracted just under 2000 members and counting.

“When my father passed away in 2011 and I had finished his story, he was the founder of the insurance industry, and I had this idea that it was an old treasure that nobody knows. Many many years later, it was on a Sunday, and while listening to Micky Mancham’s song, about Lafet La Misere I think, and we had this thing that’s sort of like a chest that we used to sit on, so I thought it would be interesting. So I put some of the old stuff in there and shot a little video and we uploaded it on there,” Mr Bonte explained.

Ms Scharfenberg, who has herself spent a good portion of her life living abroad, is of the view that Seychellois and descents living abroad lack any real connection to their home, although they have a thirst to share, relive and reminisce their experiences and fond memories.

“At first we thought to do it about the history of Seychelles but then we observed that there are many Seychellois who reside abroad and their children or grandchildren have never visited Seychelles, and know nothing about Seychelles. At that point we thought to make it into something constructive but fun at the same time, to help then trace their parents and grandparents steps; what is Seychelles? What was life like in Seychelles in the olden days? What we eat?”

“Even if it is Seychellois living abroad, what is most important is that it goes to show that they miss home, and there are not enough things for them to see that connect them to Seychelles, nor is there the interaction. We want the interaction to be something that they can always connect to. They do not need to interact with us, but with the other members spread all over as well,” Ms Scharfenberg noted.

Upon requesting to join the group, Facebook users need to answer three questions as to their relation to Seychelles, and the various topics in which they have an interest. As a member of the group, users can view materials, resources and content related to specific topics and share their own content, mainly old photographs, of life in Seychelles. The list of topics is ever-growing and presently include ‘June 29, 1976 Independence Day’, ‘Treasure’, with subtopics such as ‘La Buse’, as well as stories, myths and folklore, and ‘Lost Treasure’ under which artifacts such as the ingenious coconut floor brush known as the bros koko are celebrated. Other topics include the Seychelles College and the National Youth Service (NYS), where many Seychellois spent their formative years and historical events of significance.

Members of the group are free to participate, share and add content relevant to the group or topics. Thus far, the ‘La Buse’ treasure has garnered lots of attention, even catching the attention of British celebrity Jeremy Clarkson. In addition to the forum, Mr Bonte and Ms Scharfenberg create live videos on topics of interest, live streamed to the group as from 5pm on Sundays.

As the group establishes and grows, the pair expect to take the idea further to produce a documentary pertaining to the history of Seychelles. A full-length feature film is also planned within the next five years.

“We want to thank all those who wait for us, all who enthusiastically wait for our posts, even the members from Seychelles as we are getting more of them recently, as it would not be as exciting without them. Keep on sharing and participating,” Ms Scharfenberg ended. 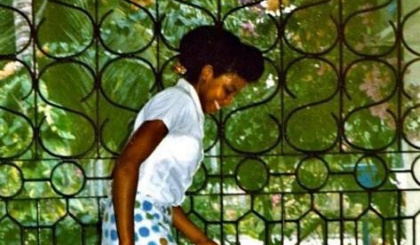 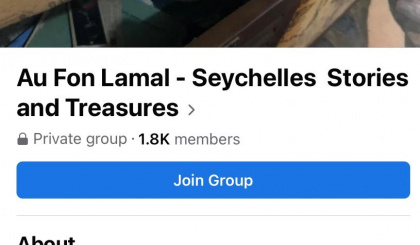 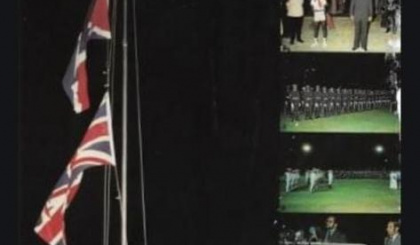