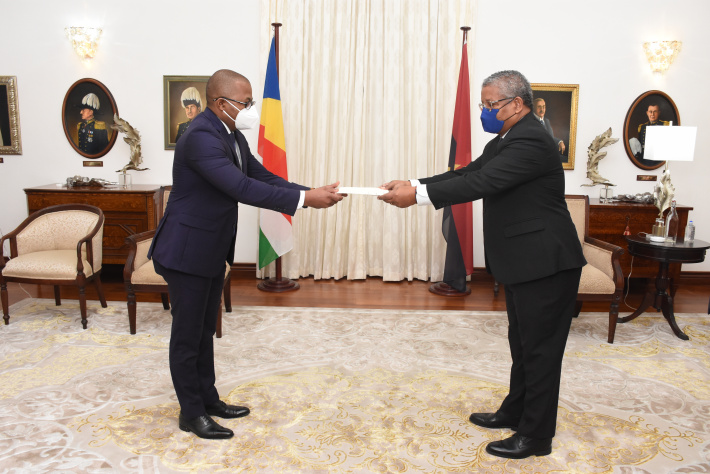 The new ambassador designate of the Republic of Angola to the Republic of Seychelles, Sandro Renato Agostinho de Oliveira, presented his credentials to President Wavel Ramkalawan yesterday morning at State House.

Mr Agostinho de Oliveira is the 3rd Angolan ambassador to be accredited to the Republic of Seychelles and he replaces Prof. Ambrosio Lukoki who was accredited to Seychelles on July 1, 2008.

The Angolan ambassador noted that the discussions with the President were mainly about how to give a new dynamic to the bilateral relationship between the two countries.

“We had the opportunity to discuss the current state of relations between the two countries, with the aim of extending cooperation to the bilateral ambit, in a perspective of generating tangible reciprocal benefits in various domains. It would be premature at this stage to talk about the areas we have identified but I will be here for the whole week and I will be visiting various sectors in Seychelles and then after I will be able to concretely say in which areas we will be working together. One sector for sure will be entrepreneurship and the private sector.”

Speaking about the relationship between these two countries, the new Angolan ambassador stated that “the people of Angola and Seychelles share a long history of cordiality and partnership in the multilateral sphere. We are now mandated to establish the necessary mechanisms for a greater political and cultural proximity, larger movement of people and goods and increased trade between the two nations. Our relations are mostly bilateral through the African Union and SADC. It is now high time to improve this relationship. We would like to challenge the Seychellois businesses to explore the investment and business opportunities available in Angola, as we commit ourselves to inviting the Angolan business sector to invest in the economy of Seychelles,” stated Mr Agostinho de Oliveira.

The Angolan ambassador will also call on other local dignitaries such as the Vice-President; Designated Minister; Minister for Finance, Economic Planning & Trade; Minister for Foreign Affairs and Tourism; Minister for Transport; Minister for Investment, Entrepreneurship and Industry; Dean of the diplomatic corps; Attorney General and secretary general of the Seychelles Chamber of Commerce and Industry (SCCI).

Angola and Seychelles established diplomatic relations on November 7, 1986 and the new ambassador will be based in Dar Es Salaam, Tanzania.

Angola is located on the west coast of southern Africa and its population is more than 30 million. Angola has vast mineral and petroleum reserves, and its economy is among the fastest-growing in the world, especially since the end of the civil war.

President thanks Seychellois community in Australia for contributions to the Covid-19 Fund |07.06.2021