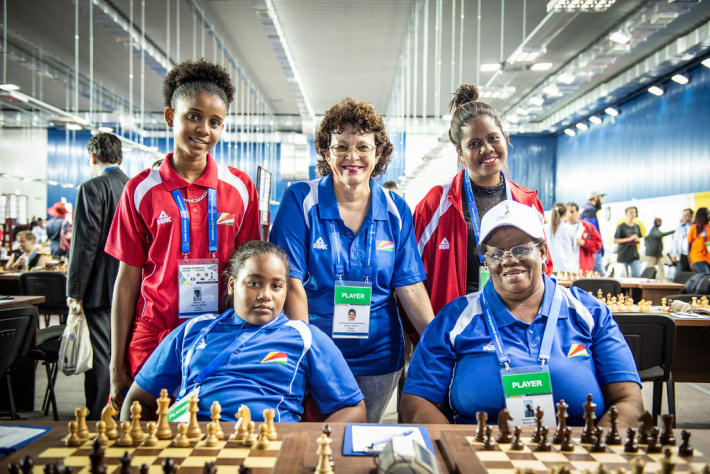 Ms Contoret followed the training via zoom conferencing seminars and there were some 30 delegates in her group. The course ran for four days and delegates had two hours of zoom session each day.

She can now practice as an online arbiter.

“As an online chess arbiter one has to be very vigilant and be very focused. I am ready now to start being an online arbiter. All officiating is done on line via Zoom,” Ms Contoret told Sports NATION.

She added: “It is very interesting and all players should play their games on a laptop with a webcam on the laptop on during the games so that the arbiter can verify whether there is any outside interference and there must be another camera on the side to see the playing area. While online the arbiter can also see the screen and the games being played. In fact monitor everything that is going on.”

Ms Contoret noted that the hybrid online arbiter is partly being physically present on site. “The individual computers for the teams are all linked online and at the same venue. There is both manual and online officiating via Zoom,” she explained.

Ms Contoret has been playing chess since she was still at school at the Regina Mundi Convent and Seychelles College. Since the age of 18 she has been the treasurer of the Seychelles Chess Federation.

She said she was the first female to join the local chess federation.

At the African Junior Chess Championship from December 27, 2015 to January 6, 2016 she was the deputy chief arbiter.

She also officiated at the 42nd Chess Olympiad from August 1-14, 2014 in Tromso, Norway and was the match arbiter for the ladies’ top section.

In 2019, she was named the deputy chief arbiter of the All-Africa Games held in Morocco from August 23-29.

As for the Seychelles Chess Federation (SCF) chairman Benjamin Hoareau, he told Sports NATION that “Ms Contoret’s achievement isn't just an advantage for the federation as it is also an additional awareness she has built for the local and international world of chess, hence opportunities can open for her to represent Seychelles or be an arbiter in the hybrid or Fide online tournaments. Even locally too.”

He added that Ms Contoret is the only active international arbiter for Seychelles. “However, Ragul Pillay, Dericka Figaro, myself and some other players and parents assist greatly during local competitions.”