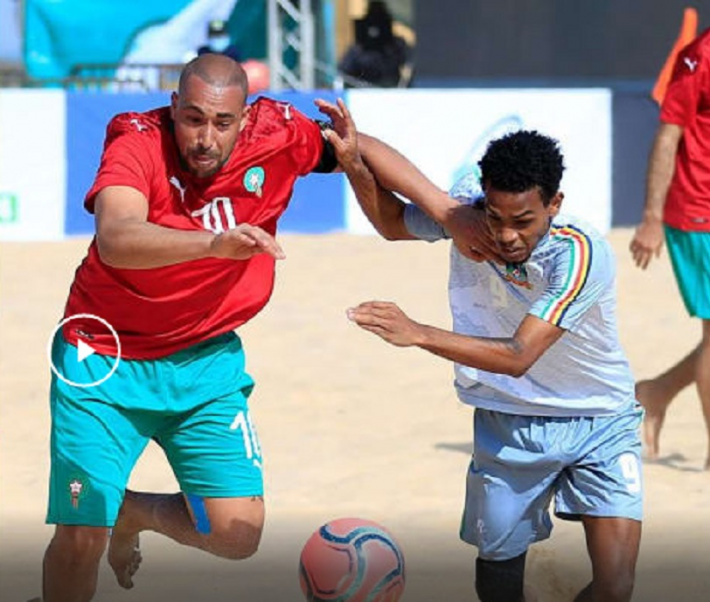 Action from the Seychelles–Morocco match

The Seychelles selection have started competition at the ongoing African Beach Soccer Cup of Nations in Senegal on the wrong foot, suffering a heavy 1-5 defeat at the hands of Morocco on Sunday in group B.

Despite being the weaker side at the African Beach Soccer Cup of Nations (BSAFCON), the local selection managed to put up a slight resistance in the first two periods of the match, conceding only two goals for a 0-2 deficit at the end of the second round.

The Moroccans however imposed their domination in the last round of the match, scoring three more goals, compared to only one for Seychelles, ending the match with a comfortable 5-1 victory.

The national selection were supposed to be in action again yesterday against the Mambas of Mozambique.

In the other matches played on Sunday, Mozambique beat Egypt 7-5 in group B, while reigning champions and hosts Senegal crushed Uganda 5-1 in group A.

All actions of the tournament are taking place at the Saly Beach Soccer Stadium, a temporary facility constructed especially for this competition.

The stadium has capacity for 1,000 spectators, with strict health protocols in place throughout the competition due to the Covid-19 pandemic.

The tournament is due to conclude on Saturday May 29, with the two teams that reach the final qualifying to represent Africa at the 2021 Fifa Beach Soccer World Cup, scheduled to be held in Moscow from August 19 to 29.

The 2021 tournament ‒ the BSAFCON ‒ is the premier beach soccer championship in Africa contested by men's national teams who are members of the Confederation of African Football (Caf).

However, due to the Covid-19 pandemic and rising water levels on the shores of Lake Victoria affecting the host beach, Uganda withdrew from hosting.

Senegal was subsequently chosen as the new hosts.