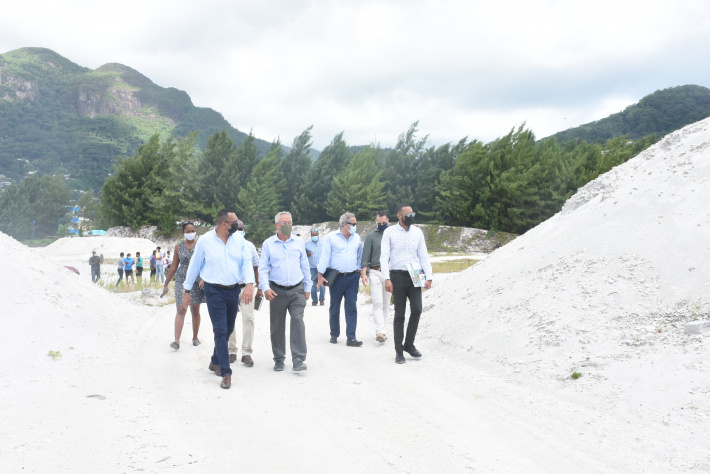 The Minister for Fisheries and the Blue Economy, Jean François Ferrari, visited the Ile du Port designated fish processing area yesterday morning. He was accompanied by seven potential investors who plan on developing the area.

The delegation also comprised representatives from the Ministry of Housing, Seychelles Investment Board as well as the principal secretary for fisheries Roy Clarisse and the chief executive of the Seychelles Fishing Authority, Nichol Elizabeth.

In November last year  Minister Ferrari explained that more facilities, especially those that will support land-based services for fisheries, must be made available for the businesses and investors in Seychelles.

A total of 13 requests were made by potential investors to acquire a piece of land, from which seven qualified.

During the visit the minister explained that the administration is committed to diversifying the economy and fisheries is a key part of that plan.

The zone was marketed to different local and international investors and it will be used only for fish processing.

“This is an important milestone in the development of fisheries in Seychelles. We have designated this whole area as a fish processing zone and have opened expressions of interest for investors to come and participate in the development of this zone. The visit is to show potential investors that we are serious about making land available for the purpose,” said Minister Ferrari.

He noted that the government will be providing electricity, road access and water treatment facilities and hopefully when the project is completed we will have one of the most modern fish processing zones in the Indian Ocean or maybe in the world.

A 300-metre port is the first part of the project, Minister Ferrari explained, adding that inside of the zone there will be factories that will process fresh, frozen, cooked and pre-cooked tuna and tuna like fish for export.

The minister is also encouraging partnership when it comes to projects like these, adding that the government will no longer be involved in commercial businesses and it is up to local investors and businessmen to invest in projects.

“When the development is complete we will get a revenue of €4 per square metre and this area has over 55,000 square metres which will bring in a huge revenue,” said the minister.

The next phase of the project now will be to see the final proposals that the seven  investors bring forward and Minister Ferrari noted that many elements will decide if a project gets approved such as if the factory will be environmentally cautious, if it is financially secure and so on.

Adding to what the minister said, Mr Elizabeth noted that priority in this development is for Seychellois. He said that the process of tender began three months ago and they will end the selection process by June where the investors will know if they have been selected and how many pieces of land have been allocated to them.

During the visit of the sites yesterday investors present were able to talk about some of their concerns with the minister and his delegation.

Wilson Nancy, director of Qualitreat Pty Ltd, said that the visit was very informative as he was able to bring some of his concerns and get answers from the minister.

He also added that seeing the site has helped him in the conceptualisation of his project.

Randolph Payet, director of Nautilus Maray/tuna frontiers, echoed the same sentiment though as his fellow investor, adding that he is already involved in the fishing industry and he wants to expand his business as he feels that there are many potential sources of income in Seychelles waters that no one is exploiting.

The accompanying photos show the minister and the investors touring the fishing zone yesterday. 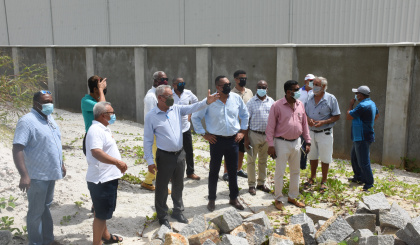 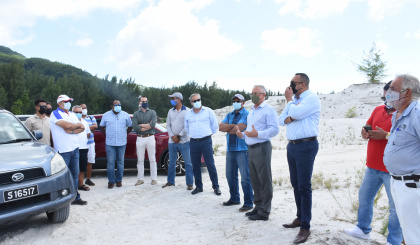 Seafarers satisfied with ongoing effort to settle their compensation with the EU |27.08.2021