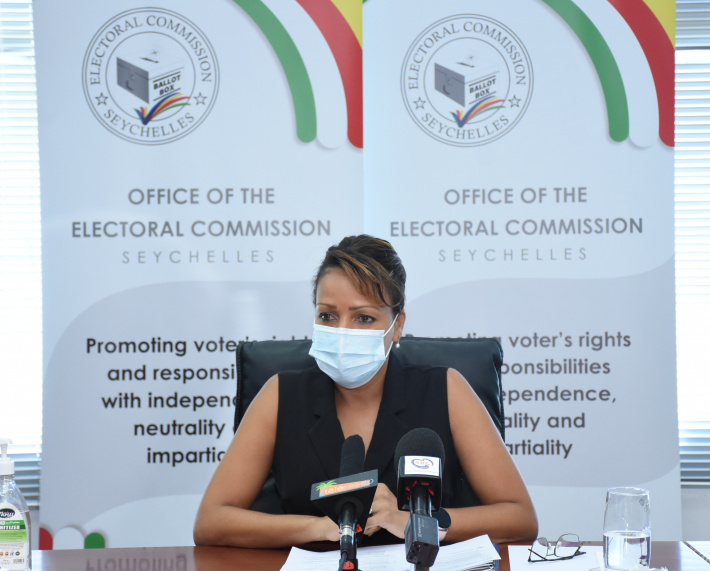 The Electoral Commission explained that it cancelled the registration of Lalyans Seselwa as a political party because the party failed to meet certain requirements under the Elections and Political Parties Acts.

It firstly failed to comply with Section 11 of the Political Parties Act which states that a registered political party should notify the Electoral Commission of any changes to the address of its registered office and to its office bearers.

Lalyans Seselwa failed to do either of that, Mrs Amesbury stated.

Additionally, the party was unable to attest and confirm that it had 100 or more members. In fact, it would seem that Lalyans Seselwa had no other members aside from its leader, Patrick Pillay.

“Based on Section 9, the party no longer exists. Our evidence and research shows that, at present, all office bearers except for Mr Pillay have resigned so this is mainly why we have cancelled its registration,” remarked Mrs Amesbury.

The chief executive of the Electoral Commission said that the commission appointed a liquidator to dispose of the assets of Lalyans Seselwa and place them in the consolidated fund.

This mainly includes the sum of R18,000 which was provided by the Electoral Commission to Lalyans Seselwa to support the campaigns of its candidates who were standing in the 2020 legislative elections.

To recall, amendments to the Elections Act in August 2020 made provisions for financial support to election candidates of political parties.

According to its investigation and as stated in its financial report for the 2020 National Assembly and presidential elections, the R18,000 that was doled out to Lalyans Seselwa was never used and should still be with Lalyans Seselwa.

The financial report notes that Lalyans Seselwa did not submit its consolidated financial statement to the commission as required unlike Linyon Demokratik Seselwa (LDS), United Seychelles (US), One Seychelles and the two independent candidates.

Despite several initiatives at establishing contact and requesting the submission of the report, Lalyans Seselwa failed to comply.

The Electoral Commission said it also did its utmost to establish formal contact with Mr Pillay to discuss the consolidated statement and the status of his party but to no avail.

There were a few times when the officials managed to get a hold of him to explain the situation but they received no feedback from Mr Pillay and letters similarly went unreplied.

Failure to submit the said report consists of an offence under section 94(4) of the Elections Act which is punishable by three years of imprisonment and a fine of R20,000.

“The commission’s approach to close down Lalyans Seselwa was a quick one, and appointing a liquidator was the shortest route to achieve the same objective we would have reached if we were to take the longer route by going through the justice system to regain the R18,000. The Electoral Commission has cases in court that go back to 2016 and we felt that this is more judicious as it will cost us less,” explained Mrs Amesbury.

Lalyans Seselwa’s leader has yet to make any objections to the dissolution of his party even though he has 14 days, from the date of the notice, to do so.

“Our legal officer had a conversation with Mr Pillay over the phone, explaining the situation and he said yes. We sent him e-mails at various instances and letters but Mr Pillay has never come back to us.”

A break-away faction of the ruling party – Parti Lepep ‒ Lalyans Seselwa was formed in April 2015 and it was a force to be reckoned with during the presidential election in 2015 when it took 14.19% of the total votes in the first round.

This was a staggering feat for an opposition party which had been in existence for less than a year. Its leaders at the time were Patrick Pillay and the country’s current vice-president, Ahmed Afif.

Together with the Seychelles National Party (SNP), Alexia Amesbury’s Seychelles Party for Social Justice and Democracy and independent candidate Philippe Boulle, Lalyans Seselwa morphed into the Linyon Demokratik Seselwa (LDS) to take on Parti Lepep’s James Michel and the legislative election in 2016. LDS won the election on a 15-10 score.

However, Lalyans Seselwa broke away from LDS in February 2018 after Mr Pillay resigned as Speaker of the National Assembly and elected member for Anse Boileau over “irreconcilable differences” although the Lalyans Seselwa’s secretary general, Ahmed Afif, noted that the party’s allegiance remained with LDS.

Lalyans Seselwa fractured even more as its former members retained their seats in the National Assembly under the LDS umbrella.

Patrick Pillay was unable to stand in the presidential election of 2020 after only garnering 489 signatures and Lalyans Seselwa announced its support to the party in power at the time, United Seychelles – a snub to the LDS coalition it once formed part of.

Speaking to Seychelles NATION, Mr Pillay said he will not challenge the decision as he has achieved his objectives in politics and it is time for him to take a step back from politics.

“I believe Lalyans Seselwa has achieved its objectives of removing a corrupt government led by James Michel from power.

“I have served my country for 50 years as director, principal secretary, minister and ambassador. I created Lalyans Seselwa to remove Mr Michel from power as he destroyed what President France Albert Rene fought for and accomplished,” said Mr Pillay.

The 72-year-old added: “In 2016, Lalyans Seselwa formed part of LDS to win the legislative assembly election and in 2020, the new President (Wavel Ramkalawan) disqualified my candidature to run for president. I threw my support behind President Danny Faure and United Seychelles. I still support the United Seychelles because some LDS officials are ungrateful. They forget that it is thanks to Lalyans Seselwa that they have reached where they are now.

“Lalyans Seselwa and I have achieved our objectives and I believe it is time for me to take a step back from politics and relax.”

Lalyans Seselwa is not the only political party to have seen its registration cancelled by the commission.

In 2020, the Electoral Commission cancelled the registrations of the Seselwa United Party (SUP), Seychelles Freedom Party (SFP) and the Popular Democratic Movement (PDM).

Meanwhile, this year it cancelled that of the Seychelles Patriotic Movement (SPM) as well as that of Lalyans Seselwa.

“It has to be noted that the Electoral Commission first enters into a discussion with any party with its party leader before it decides to cancel its registration. It is not a decision that is taken suddenly and without any forethought or research,” highlighted Mrs Amesbury.

“The commission at this point in time seeks to urge all political parties to ensure they are in compliance with the Political Parties Act and the Elections Act,” concluded Mrs Amesbury.