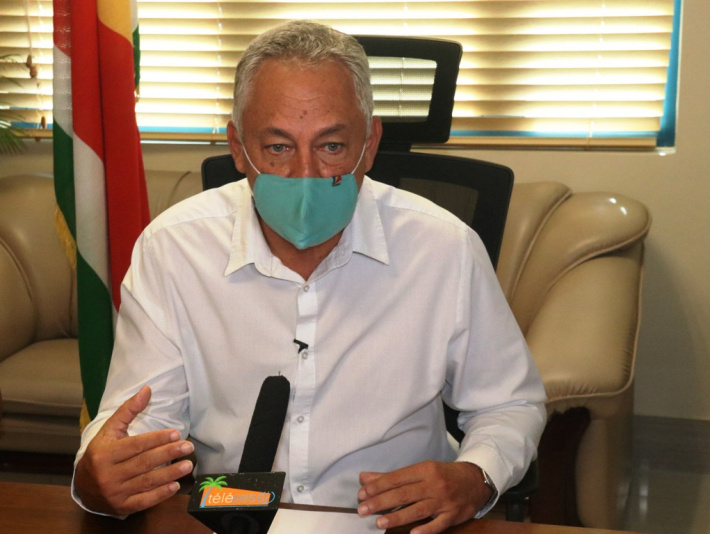 The European Union (EU) has sought a final set of data from the Ministry for Fisheries and the Blue Economy prior to disbursing compensation payments for Seychellois seafarers who were engaged in employment on EU fishing vessels between 2005 and 2020, it was announced on Friday, April 30.

In a press conference held at the ministry, Designated Minister and Minister for Fisheries and the Blue Economy Jean-François Ferrari conveyed his disappointment with regard to the lengthy and complex procedures within the EU, although he also remarked that the government remains hopeful that funds will be disbursed to government in the coming weeks, to cover the payments.

“Firstly, let me tell you that we are doing a lot of work, and I wish to thank PS Clarisse for his dedication to follow-up on the dossier. We are in negotiations with the EU daily, and it is not easy. Today, I am announcing that we are yet to come to a conclusion on the negotiations.Where are we? The EU is still seeking from us figures, explanations and technical information on the seamen and the years for which they worked. Even if we have remitted this information to them numerous times, I can say that I am disappointed with the negotiators on the other side, who continuously ask us for the same information in different formats, and always seeking clarifications,” Minister Ferrari said.

“I am disappointed but at the same time I am accustomed to it, because EU is a difficult organisation to work with, and its procedures are really difficult and complex. I don’t want to say that I accept what they are saying. No I do not accept it. I am a bit angry and a bit disappointed, but the negotiations go on,” Minister Ferrari stated.

According to the minister, a last set of data was sought by the EU on Wednesday April 28, among which includes information as to the responsibility of EU member states in funding the compensation. There is no debate or contention over payment of the compensation, he assured, as there is consensus that compensation is to be paid, although the final details of how, when and what amount to be paid is still under discussion, on the basis that the 27 EU member states must be consulted prior to a decision being taken by the economic and political union.

As per figures provided by principal secretary for fisheries Roy Clarisse, a total of 116 claims to a sum of R11 million were submitted to the Seychelles Fishing Authority (SFA) by seamen who were engaged in work onboard EU vessels between the period between 2005 to 2014. Of them 78 are considered to be in order, and are to be paid by the EU on the agreed date. Further queries are required on 38 claims on account of missing or lack of information.

“The government is claiming from the EU only for the period between the years 2005 to 2020. For seamen who worked 2014 to 2020, government has paid the seafarers in advance, so now we are asking the EU to reimburse these funds, and to also pay for the 2005 to 2014 period,” PS Clarisse added.

Although it has been proposed that government fund the payments in advance to be reimbursed by the EU, the option is not viable presently due to the economic crisis resulting from the Covid-19 pandemic.

“There is a sum that government pays upfront without the EU paying upfront and which is supposed to be reimbursed by the EU (3.4 million) this is financed by the government, with the understanding that once things are sorted out the EU will reimburse. There have been suggestions that we do the same thing for the missing piece, that the government pay, and then claim with the EU. There are two issues with this, one is that government in this Covid-19 era has no money to spend, and secondly, what if we are not reimbursed for the first portion? We cannot play with public money, and we do not know when we will be reimbursed. Our claim is clear, and the EU accepts and I as Minister, will continue to pressure them to resolve this,” Minister Ferrari added.

As of 2005 onwards, provisions for compensation of Seychellois seafarers are incorporated into agreements. Seafarers who worked onboard EU vessels between the period of 1984 to 2005 period were not provided for, and were not covered by any frameworks determining compensation rates. As of 1991 when the minimum wage was approved by Cabinet, it was agreed that the rate be based on the minimum salary in public service as the starting point to pay the seafarers based on the years that they worked.