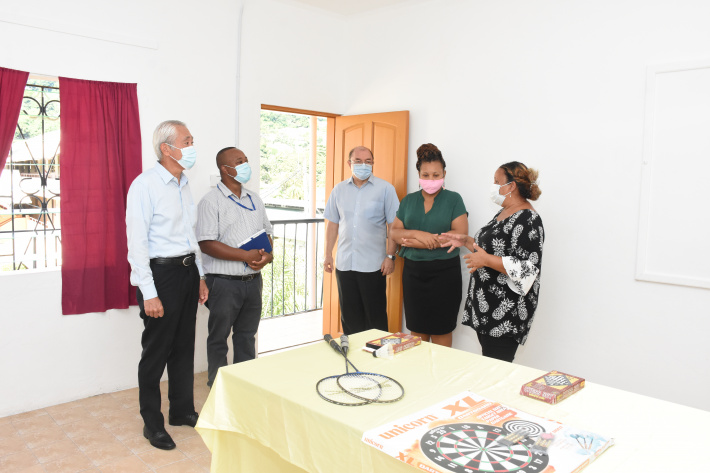 The Japanese ambassador to Seychelles, Tominaga Makoto, has expressed his satisfaction with renovation work done on the school for the deaf.

“I am very, very satisfied with the renovation. It is a very sophisticated and well equipped institute for the deaf. Naturally I am very glad to see this renovated institute,” Ambassador Makoto said.

The ambassador made these remarks yesterday after visiting the newly renovated ex-maritime school, Mont Fleuri, which is now the new centre for the hearing impaired.

Work on the new school for the deaf has been made possible through a donation from the Japanese government under its Grant Assistance for Grassroots Human Security Projects for NGOs and local governments. The grant given for the renovation was 10 million Japanese yen (R1.3 million at the time of construction of the project). The aim of Ambassador Makoto’s visit yesterday was to view the work done.

The new centre for the deaf was also partly funded by the Association of People with Hearing Impairment (Aphi).

“We are happy in a time when we are on the final process of the completion of every work to announce to the Seychellois community that you have a new institute for the deaf here in Mont Fleuri,” he added.

Ambassador Makoto explained that the Japanese grant (Grassroots Human Security Projects) exist every year for every country. He called on local NGOs and local communities to make use of such opportunity. After a review of the project proposals, successful applicants then get the financial assistance.

It was the chairperson of Aphi, Anita Gardner, who led Ambassador Makoto on the tour of the two-storey renovated centre. The visit started in the kitchen (for the training of students) located on the ground floor, and then on to the classrooms, sick bay, tea room and two gender hostels for accommodation of children from Praslin and La Digue, among other room facilities located on the first floor.

The visit ended on the second floor housing the administration and other training rooms, including a games room, among other facilities.

The school being on holiday at the moment, Ambassador Makoto was not able to meet the nine hearing impaired students (five boys and four girls) who are mix studying at primary and secondary levels. They are the only students studying at the facility since its opening following the re-opening of schools when some Covid-19 restrictions were lifted.

The school is equipped to cater for children aged four to 19 and has Shana David, Calvin Morel and Shireen Hoareau as main teachers.

“When more Covid-19 restrictions are lifted and we are able to fully start our activities, we expect many more hearing-impaired students to come to the centre as it is not only a school but also a one-stop centre where hearing-impaired persons can indulge in many activities and make use of the many services provided,” said Mrs Gardner.

She stated that the new school is exactly what Aphi was looking for as it is more spacious compared to where they were operating at the Au Cap school, for which though, they were thankful to have had.

She noted that the centre has trained and specialised teachers to deal with hearing impaired students. She thanked the Japanese government for sponsoring a good cause.

The accompanying photos show some highlights of Ambassador Makoto’s visit to the school yesterday. 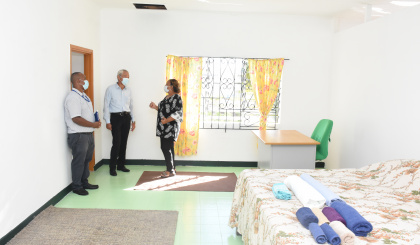 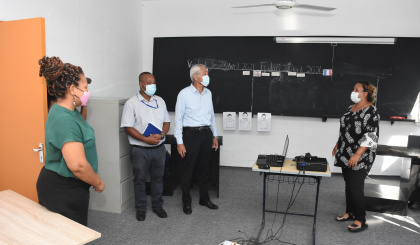 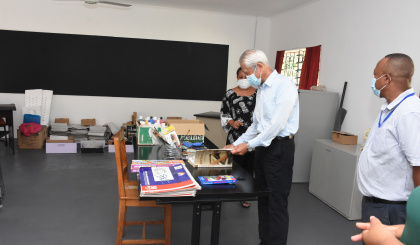