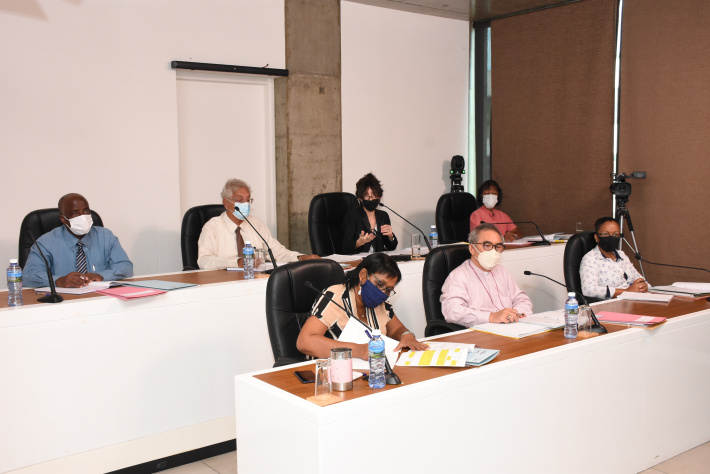 The Truth, Reconciliation and National Unity Commission (TRNUC) resumed its public hearing sessions yesterday, following a long suspension due to the restrictions set by the department of health as part of efforts to mitigate the spread of Covid-19 in the country.

Yesterday’s session – hearing number 137 – was the commission’s first public hearing for the year 2021.

To kick-start the session, chairperson Gabrielle Louise McIntyre commended the good job of the health authority for the efficient roll-out of the country’s vaccination programme which she said has enabled the commission to recommence its public hearing.

She added that the TRNUC notes that it has implemented and is complying with all the Covid-19 directives from the authority and also thanked the latter for its assistance to the commission in that respect.

With regard to hearings that were scheduled for the months of January, February and March 2021, Mrs McIntyre said the commission will be in touch with those persons scheduled to be heard during that period to re-schedule their appearance during the coming weeks.

On behalf of the TRNUC, she expressed her apologies to all those people for any inconvenience caused by the delay and rescheduling.

She also assured the general public that during that period, the TRNUC has not remained idle, but rather focused its energy on its investigations and has determined a number of its cases, while making good progress in the determination of others.

“Nonetheless, the work of the commission remains significantly constraint by capacity and resource issues and its efficiency is very much dependent upon the co-operation of the information providers,” noted Mrs McIntyre who further added that given its limited temporal mandate, the commission urges expeditious responses to its request for information from all providers, so as not to unduly hinder the commission’s progress.

Mrs McIntyre also took some time to go over the mandate of the Commission which is to investigate complaints of alleged human rights violations committed in relation to the 1977 Coup.

The purpose of the TRNUC is to establish the truth about alleged violations; to try and bridge divisions caused by such violations and to recommend compensation and reparations to victims and determine whether or not to grant amnesty to perpetrators.

The ultimate aim is to bring closure to victims and perpetrators and to unite the people of Seychelles around a common agenda going forward.

Basically it is about reconciling people through acknowledging and accepting responsibility for the past.

Ultimately, the commission aims to unite the people of the Seychelles around a common agenda that will help them move forward in confidence and with a sense of common purpose and ensure that human rights violations do not recur.

As the objectives of the commission include ascertaining the truth, to create an accurate and objective record of violations, and to unite the people of Seychelles around a common agenda that will help them move forward in confidence and with a sense of common purpose, the Act provides for the granting of amnesty to perpetrators, from prosecution, as a means of encouraging those persons to come forward and to tell the truth about the violations alleged against them.

At yesterday’s sitting, there was only one open session, namely case 0303 of Weston Wirtz, regarding a case of assault at the hands of the army, along with the seizure of his commercial building at the Providence Industrial Estate.

In close sessions, the TRNUC listened to witnesses in case 0199 of Christopher Sarah and case 0156 of Mathew Docteur.

The first person to take the TRNUC’s chair yesterday was complainant Weston Wirtz and based on his request, the commission invited Robert Ernesta who accepted the invitation.

Mr Wirtz began his testimony with the arrest of someone close to him in 1998 when the country was already in the multi-party system.

He explained that upon getting the news, he called the Seychelles People’s Defence Forces (SPDF) headquarters at Bel Eau and asked to speak to Robert Ernesta who was one of his ex-students at the Seychelles College.

Upon receiving Mr Ernesta’s mobile phone number, Mr Wirtz called him regarding the arrest to which the former confirmed that the person in question was being detained at the Grand Police prison.

Following the testimony of Mr Wirtz, describing the person as being a model citizen, with no criminal or related bad record, Mr Ernesta released the person from army custody.

Two weeks later, according to his testimony, another person close to him and the one previously arrested was also taken into custody, and this time, Mr Ernesta did not pick up his calls.

Being a person who likes to take risks, Mr Wirtz said he and someone else went straight to the Grand Police prison to see the person who he said was asthmatic.

“Bate pankor gannyen la, dan 8er tanto ki pou ganny bate”, (he has not been beaten yet, tonight at around 8pm that he will receive his beating) was the reply he got from a soldier at the gate.

He then decided to go to Mr Ernesta’s residence to try and talk to him when suddenly a group of soldiers brutally arrested him and threw him at the back of their vehicle, before taking him to the Intendance beach where he was viciously beaten.

Mr Wirtz explained he managed to survive the beating only because of his previous knowledge of martial arts and self defence.

He also noted that among the group he recognised Jeffery Marie who was previously questioned by the TRNUC regarding the Grand Police prison atrocities.

Mr Wirtz said following a phone call from Mr Ernesta, the beating stopped and he was taken back to where he was picked up.

He also noted that on several occasions he noticed Jeffery Marie sniffing around his business premises, checking on his movements.

Mr Wirtz also gave account of an incident where someone borrowed his car to go and beat up the late Macdonald Marengo as revenge for previously assaulting him.

This, he said, may have contributed to get him on the government black list at that time.

Mr Wirtz also explained that the incident with the army also affected his professional career whereby his foreign partners cut him out of their business agreement based on the fact the he was going against the system and place which provided them with the place and opportunity for business.

Another complaint from Mr Wirtz was regarding his building at Providence which he said has been seized by the authority for over 20 years.

Taking the seat to shed light on the beating incident, Robert Ernesta said in 1998 the special operation was set up to clean the country of the violent environment which was affecting Seychelles, causing panic and fear among the citizens.

He explained that the decision was taken by the higher authority, while he was only on the field as soldier, or officer on the ground, executing orders to deal against the ‘armed insurgency’ which was happening.

He noted that the operation was triggered by the shooting of Private Lazare Adelaide and was not politically motivated, but rather an internal security measure, or ‘counter insurgency’.

“It was a political decision which needed to be executed,” he explained.

In the case of Mr Wirtz, Mr Ernesta explained that on that particular day, he received a call from his daughter who was alone at home, telling him that there was a man outside.

He said, in the middle of the counter insurgency, he ordered soldiers to go to his house and check the situation.

It was at that time that the soldiers took Mr Wirtz away and the incident followed.

Mr Ernesta explained that as a father, he was concerned about the safety of his daughter, fearing that people were targeting her since he was in charge of the operation.

It was upon realising that it was Mr Wirtz that he ordered the soldiers to stop the beating and bring him back to where he was initially taken, where he met up with him for a drink, before escorting him to his home at Cascade. 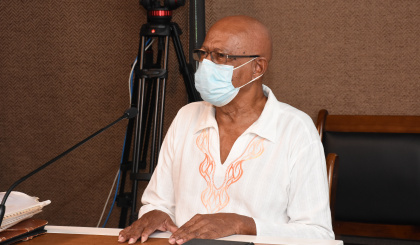 How to upcycle your used newspapers through block printing |07.07.2021