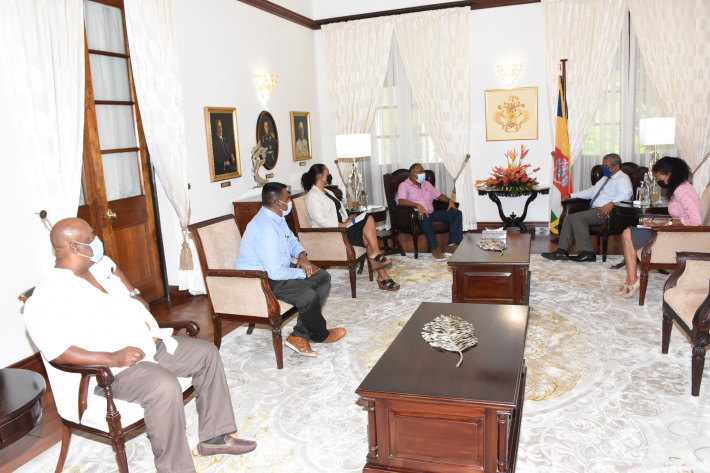 The meeting between President Ramkalawan and members of the Retailers’ Association (Photo: Joena Meme)

The number of retail businesses being affected, gainful occupation permit (GOP) procedures, difficulty to recruit Seychellois manpower, the cost of living and opening and closing hours of retail businesses as a result of the Covid-19 restrictions, were among some pertinent issues of discussion between President Wavel Ramkalawan and four members of the Retailers Association yesterday morning at State House.

Kannusamy Naidu (chairman), Louisianne Jacques (executive secretary) and members Ramesh Pillay and Wilven Elizabeth, were on the courtesy call to share with President Ramkalawan the successes of the association as well as the challenges affecting retailers in Seychelles.

Speaking to the press after the meeting, Ms Jacques, who described the meeting with the President as very fruitful, said that the association is willing and committed to working with government to address and to seek solutions to issues affecting retail businesses such as the GOP procedures with regard to creating a balance in limiting foreign labour.

She argues that as they have to run a business, which at times opens until very late at night, the local labour force must learn to adapt to that situation and must be willing to work in such an environment or else foreign labour will still be needed to fill the gap.

“The labour force is a great problem within the retail industry and following the dialogue we have had with the President we feel positive that the problem will be addressed so that we can move forward,” Ms Jacques said, noting that the association will work with the Ministry of Employment and Social Affairs to help reduce the number of expatriates in the retail business.

He stated that it also includes a whole lot of other factors such as exchange rates, electricity, renting, among others, and the inclusion services used by everybody, which also bears down on the high cost of living.

He said that the retailers are supposed to only add a markup of 15% to 20% on goods purchased from wholesalers but he did not deny that some retailers are not respecting the given mark-up which is against the advice given by the association.

On the social aspect, Ms Jacques and Mr Naidu both claimed that the association has, especially during the pandemic, given a lot to society through donations, including merchants granting credits to customers in the different communities to make ends meet when they are in difficulty.

They said that the association will continue helping the community.

President Ramkalawan conveys message of condolence to the Russian Federation |13.05.2021