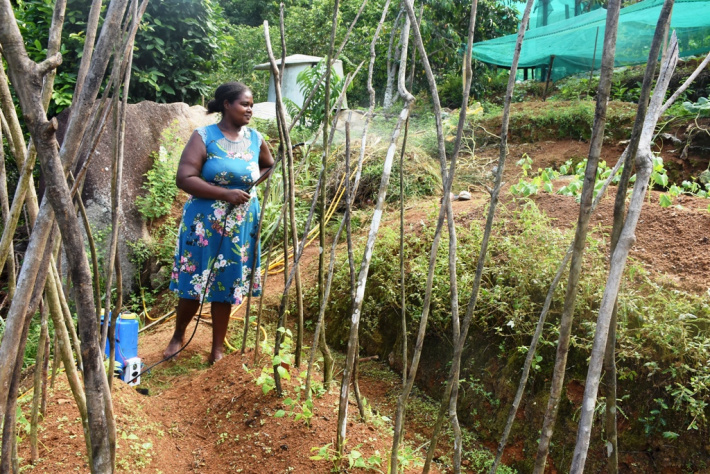 Spraying pesticides is an important task in agriculture for protecting crops from insects. Farmers mainly use hand operated or fuel operated spray pumps for this task which can be very time consuming and strenuous. It is for this reason that the National Institute for Science Technology and Innovation (Nisti), which specialises in technological innovation, has come up with solar powered pesticide sprayer fabricated by the institute itself.

The system consists of solar panel, charging unit, battery, pump and sprayer. The solar panel charges the battery which in turn operates a monitor through a nozzle thereby creating a spray.

Solar power is arguably the cleanest, most reliable form of renewable energy available, and it can be used in several forms to help power appliances. The design features a user friendly low weight component to operate with longevity for desired product efficiency that provides less vibration than fuel powered sprayer.

“At Nisti we try to look at every sector where we can incorporate technology to make the life of the operator easier,” said Xavier Estico, chief executive of Nisti.

He added that this project is four years in the making and has been put through various stages of testing by its technician Joseph Raj.

“Conventional sprayer causes user fatigue due to excessive bulky and heavy construction. This motivated us to design and fabricate a model that is basically solar sprayer in our design, here we can eliminate the back mounting of sprayer ergonomically which is not good for a farmer’s health point of view during spraying. In this way here we can reduce the users fatigue level. There will be elimination of the engine of fuel operated spray pumps by which there will be reduction in vibrations and noise. The elimination of fuel will make our spraying system eco-friendly.”

He noted that it takes under an hour to charge the battery using solar energy. However, in case of bad weather, the user can always charge it by electricity which takes about four hours.

“This invention can be used largely on bigger farms where we can implement the design and concept and turn all pesticide sprayers solar operated,” said Mr Estico.

The CEO said he wants Seychelles to move forward in the fourth industrial revolution by bringing innovation not only to the farms but in all sectors.

For now the solar powered sprayer is only a prototype that Mr Estico said they will continue to improve on.

He added that after this is done, private organisations who are interested in mass producing the spray are welcome to partner with Nisti and do so.

The prototype of the solar powered spray was demonstrated yesterday at MNL farm, Montagne Posée where Nathaline Labrosse has been using the contraption on her farm for a little over three weeks.

“The solar powered sprayer is very useful because it does not require a person to pump it manually like we were doing before. It also sprays longer distances as well,” she said.

Ms Labrosse added that it usually takes her close to an hour to spray her farm with the manual sprayer, but with the solar powered one it only takes her fifteen minutes.

“It's very beneficial as there are so many things to be done when you run a farm. Not spending an hour spraying pesticides allows us to use that time cultivating and delivering our products,” said Ms Labrosse.

The accompanying photos show highlights of the demonstration of the prototype of the solar powered spray at MNL farm, Montagne Posée, yesterday. 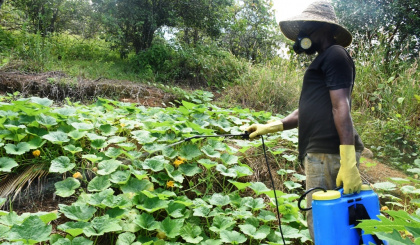 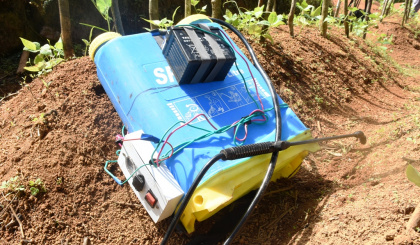