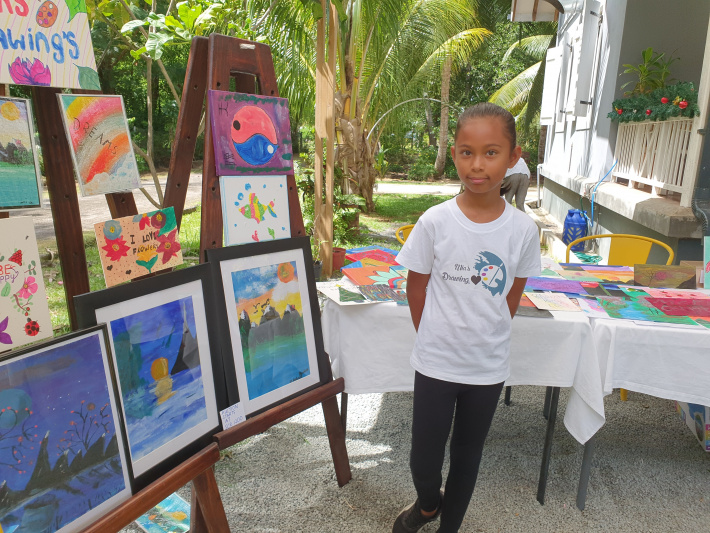 Mia Ma-low or better known on her Facebook or Instagram page as Mia’s drawing, turns 9 this April. She was diagnosed with Autism at the young age of 3. As a parent, hearing that diagnosis from a professional is crushing; everything comes crashing down when you are told your child is so far behind her actual age and she might never be like kids her age. Her love and passion for art merely started as a form of therapy to get her to better express and control her emotions, most of all it gave her patience as she was a very hyper girl that was all over the place.

She encountered a lot of development delays one of which mostly stood out was her speech which we had to seek help with. Art came in as a form of therapy. It was her calm when there was a storm. Art was and still is her comfort zone, the place where she has complete control.

Mia had many repetitive behaviour and also sensory issues which we had to deal with – sensitivity to light, food (which we have overcome but still deal with issues now and then). Noise, our biggest struggle, use to hurt her so much and would make her aggressive. Another one was being in a crowded place with so much going on around her. She would just cry or fight back. We had to change our whole lifestyle to adapt to her needs but we also tried to teach her adaptation so we kept on insisting until she adapted to things even if it was painful. We had to set boundaries which had to be amended every now and then because trust me these little people understand more than you think they do.

We dealt with sleep issues, gosh this one is still a struggle to this day but much better than before.

She went through a phase of self-inflicting harm on herself and me. As a mother this was my toughest thing that I had to deal with, the constant stress, stares and comments from other people was never helpful. It led to me mostly staying home and avoiding public places or invites to events as it was mentally exhausting for both my child and family.

For most of those first 2 - 3 years of diagnosis it was frankly physically, mentally and emotionally draining mostly for me as I spent all my time with her 24 /7. But I can’t deny the whole family also endured it. Everything was about her and everything else was neglected. I went through a stage of withdrawal, giving up was on my mind constantly, I felt so alone and helpless (I cried a lot too) but meanwhile I kept on researching, sought help and listened to other people’s stories and started having hope that it could get better.

After that came the stage of acceptance, and did all I could possible to try and help her giving the fact that therapies here are not given daily as I would have wished for. I became the therapist, the doctor … the list is endless.

Hard work and determination paid off as she slowly opened up and progressed daily in a lot of areas. She is where she is now because she had and still has a strong support system behind her.

We find that sometimes Autism is poorly misunderstood, yes it affects every child differently and the first few years of life are the most difficult stages a parent will go through but giving up is not an option, rather taking on the task and helping your child is the right way forward.

I believe kids on the spectrum are gifted people – be it if they are kids or adults – and with the right help and encouragement they will discover that gift and that is what will help them open up and achieve many things.

Kids with Autism teach us to appreciate the LITTLE things in life we take for granted every day. Note a person never outgrows Autism it stays with them for life, but they do learn to adapt and better cope with the world around them. As for Mia she may appear to be just like any other little girl growing up but she has her days and things we encounter that we have to deal with every now and then, we grow together.

Now back to the subject of art and how her page started. We decided to share her art to inspire and raise awareness on her condition and her talent that kept growing. Mia is an excellent example of the unexpected gift Autism can also grant. At first she would only share her drawings and paintings with close family and friends, but then people started asking if they could buy it. She instantly became more inspired to want to draw and paint more knowing she had a crowd waiting out there for her artwork. She enjoys reading the comments from her fans and seeing how many people follow her every post.

Last year we were approached by an artist that wanted her to participate in a small exhibition which featured mostly ladies and all Seychelloise, she was the youngest among them, it was her first exhibition and she was so excited. She had a whole selection of artworks that were displayed and she sold quite a bit too. It was amazing to see how she interacted with her fans and communicated with them so well. From a little girl 3 years ago who hated and could not stand to be around crowded places to now having her own exhibition you can imagine the joy for us as parents to see how far she has come and what she has accomplished with love, patience and understanding. Her art is now featured almost daily on her pages and also at Le RENDEZVOUS CAFÉ in town. She wants to save to have her own art gallery. Her dream is to become not just an artist but an archaeologist as well. We shall wait and see.We will be there to support and encourage her in whatever she decides to do. We take it day by day and we are positive she will achieve great things.