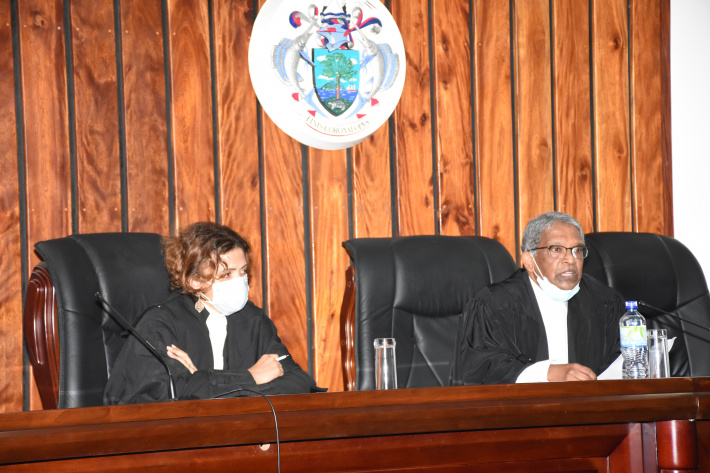 As of yesterday, the Court of Appeal started its April sessions at the Palais de Justice, Ile du Port.

The first session was chaired by Justice Anthony Francis Tissa Fernando in the presence of Justice Fiona Robinson. Justice Dr Mathilda Twomey apologised for her absence in the morning and the two other Justices – Lillian Tibatemwa-Ekirikubinza and Oagile Key Dingake – were absent from the country.

For April 2021 and August 2021 sessions, the Court of Appeal has to listen to 32 cases, out of which 11 have been disposed off as a result of the appellants withdrawing their cases, or on reaching out of court settlements.

Justice Fernando noted that “This is an unusual session and different to all Court of Appeal sessions. Instead of hearing cases continuously during the first week of the session, I was compelled to break up the session, in that 9 cases will be heard from April 6 to 8, and the remainder of the 12 cases have been listed to be heard from April 15 to 19. The break-up into two sessions had been in the expectation that Justices Tibatemwa and Dingake would be able to attend the sessions”.

He continued by saying five cases that have been listed for hearing during this session will have to be adjourned to a later date in view of the fact that they are all cases where Justice Tibatemwa, who is absent for now, had been assigned to the scribe.

Furthermore, Justice Fernando has learned from Justice Twomey that Justice Tibatemwa is in Pretoria and unwell. “It was only on March 27 that Justice Tibatemwa confirmed to her that she is in South Africa having undergone two major surgeries and recuperating and does know when she will get back to Uganda. She informed us that she had not read the Court of Appeal briefs that were couriered to her in Uganda at the end of February by the Registry, and thus will not be able to take part in the April session. We assigned her to be the scribe for the cases and the five cases had to be postponed.”

Justice Fernando also explained that it is not possible at very short notice to pass those briefs to another Justice of Appeal, who have their own briefs to deal with both as scribe and panel member.

“However, I have changed the panels in which Justice Tibatemwa was to sit as a panel member and shared the cases among the rest of us.”

Another situation that Justice Fernando brought to the attention of the court was the departure of the resident Justice of Appeal Justice Dingake on December 29, 2020 without following the normal procedures and also without any indication of his possible date of return.

“Upon my inquiry, he first said he will be back on January 31, 2021 but since then Justice Dingake continues to be absent from the country without any approved leave. Being caught with some family health issues, he formally requested me to excuse him completely from the April session and get a Judge from the Supreme Court to step in or in the alternative to do virtual hearing. I informed him both proposals were not feasible setting out the reasons in detail. On March 18, Justice Twomey informed me that Justice Dingake will be arriving by the end of March. On March 30, Justice Dingake informed me and my personal assistant that he is trying to get to Seychelles and we hope he will be permitted to arrive in Seychelles on April 9 and be able to hear the cases he has been assigned as scribe and also sit as a panel member in the other cases from April 15 to 19,” explained Justice Fernando.

In the event of Justice Dingake being unable to take part in this session of the Court of Appeal, the following cases where he has been assigned as scribe will also have to be adjourned. “This is due to the lateness of Justice Dingake informing us of his situation. I have in anticipation of the inability of or any difficulties that Justice Dingake may have, to hear the cases where he has been assigned as a member of the panel, made arrangements with three Judges of the Supreme Court, with the agreement of the learned Chief Justice to help us out in those cases,” stated the President of the Court of Appeal.

Justice Fernando concluded his remarks by saying “I have done all that I simply could and within my capacity to complete the 32 cases listed for the August session. I believe that it is our bounden duty as Justices, Judges and lawyers to help in the administration of justice by the speedy and just disposal of cases. I am however happy to inform you that out of the 32 cases that were listed, 11 cases have already been disposed off and I have also been informed that, in one of the cases a consent judgment is likely to be reached. I sincerely hope we will be able to dispose of 11 of the 20 remaining cases without any difficulties, making a disposal of 23 cases for the April session”.

After the intervention of Justice Fernando, there was the normal roll call that proceeded as usual.

Besides the April hearing session having been split into two, the delivery of judgments will also be done on two separate days.