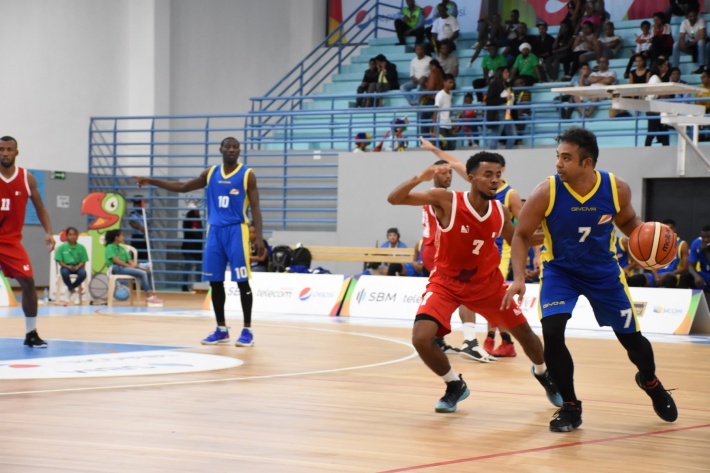 Seychelles men’s basketball selection have a high hurdle to jump now if they want to qualify fortheknockout stage of the competition after suffering a heavy defeat at the hands of Madagascar in their opening group A match on Saturday at the Phoenix Gymnasium in Mauritius.

In the match which was attended by Designated Minister Macsuzy Mondon, principal secretary for youth and sports Fabian Palmyre and the chief executive of the National Sports Council (NSC) Jean Larue, Seychelles started on a positive note, containing the Malagasies and scoring on fast breaks early on.

They managed to keep the score level, until the fourth minute when Madagascar took a 9-7 lead, a lead which Seychelles were never able to close down.

The Malagasies extended their lead to 13-7, then 16-11, before scoring two more points to conclude the first quarter on an 18-11 score.

In the second quarter, Madagascar stepped up their game and it was evident that they had some superior elements in every department of the game.

At this point Abdel Sylla and company were making all kinds of mistakes, both in offence and defence, helping the Malagasies to extend their lead.

Midway through the second quarter, they were leading 24-19, with Seychelles pushing forward to try to close the gap, but a 3-pointer from Elly Randriamapiona killed off their vibes.

At this point the score read 27-19 and Madagascar managed to chip in six more points for a 33-19 half-time score.

The third quarter was highlighted by Madagascar’s three-point shooting ability which completely sunk the Seychelles’ ship and at the end of the period they were leading 57-32.

It was clear that Seychelles had no chance to win, let alone catch up with Madagascar at that point and they did not fare better in the fourth and final quarter where nothing in terms of playing tactics worked for them.

Constant Mandimbison and Randriamapiona had the hot hands for Madagascar with 15 points each, while Andrew Rath was Seychelles’ top scorer with 14 points.

Seychelles will be in action today against Reunion in their second group match.

In the other match in the group on Saturday, Reunion beat the Maldives Islands 106-42.

“I am very disappointed as our game plan did not work at all, both in defence and offence. We did not enter the match with enough confidence to beat Madagascar, instead, we allowed them to impose their game on us and we could not get out of it. The tournament is not over and we are aware that we have lost a match and we know that our match against Reunion will be tough and everyone should be going all out to face them. The Reunion team is good technically and the players have the appropriate height, but if we do some adjustments, especially in our defence, I think we can definitely match them.”

In the other match played in the group, Reunion inflicted a severe 106-42 defeat on the Maldives, boasting their superiority in every aspect of the game.

Reunion easily won the first quarter 23-4, before meeting a slight resistance from the Maldivians in the second quarter which they still won 23-17 to conclude the first half with a comfortable 66-21 lead.

Aware of their other opponents in the group, Reunion did not take things easy in the third quarter as they applied pressure on their opponents to win it 33-6.

Already in the driving seat, Reunion cruised through in the final quarter of the match, winning it 27-15 for a comfortable 106-42 final victory.

Octavio Da Silviera led the scoring for Reunion with 19 points, while Ahmed Firash and Abdulla Mohamed each scored seven points for the Maldives.

In today’s match Reunion will face Seychelles, while the Maldives will play against Madagascar.