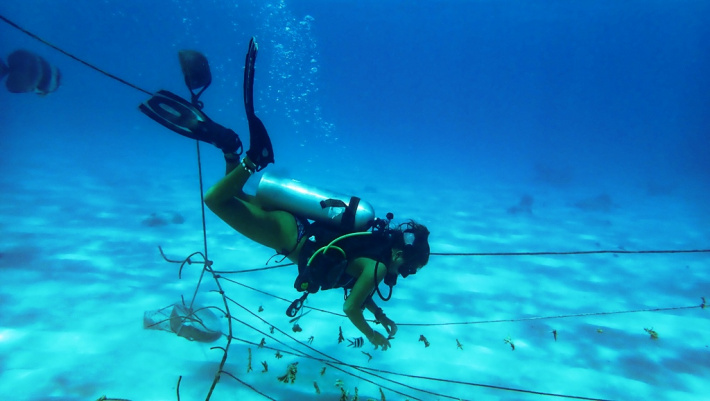 The Marine Conservation Society Seychelles (MCSS) has started implementation of a large-scale Coral Reef Restoration Project* in the Ste Anne Marine National Park, which is managed by the Seychelles National Parks Authority.

This project, which is funded by the Adaptation Fund, administered by UNDP and brings together government departments, NGOs and local communities in both Mauritius and Seychelles for the restoration of coral reefs, sees an augmentation in the coral restoration efforts undertaken by MCSS in the marine park since 2015.

The project’s objectives are the improvement of food security and livelihoods and the mitigation of disaster risk, as well as the generation of knowledge on the role of coral reef restoration as a measure for adaptation to climate change.

This is to be achieved through the active restoration of coral reefs degraded by coral bleaching.

Over the course of the six-year project, MCSS will be restoring 0.5 hectares of degraded coral reef with 12,000 coral colonies.

MCSS has been implementing the coral gardening method of coral restoration in the Ste Anne Marine National Park since 2015 and has had 5,800 corals in culture over that period.

Coral gardening entails the culture of coral fragments in nurseries followed by the transplantation of those coral colonies onto the reef.

Coral fragments remain in the nursery phase for around nine to twelve months – depending on the species and its growth rate – and require constant monitoring and maintenance.

Once the corals in the nursery have grown to an adequate size, they are transplanted onto the reef using various techniques, such as cementing corals and attaching them to artificial reef nodules where the substrate is loose coral rubble.

As the marine park is a shared and important resource for various users and stakeholders, MCSS has launched its first stakeholder consultation in the interest of transparency, raising awareness and increased stakeholder engagement.

A website dedicated to MCSS’ work on the project has been developed to inform and update stakeholders and is available in both English and Creole.

Additionally, a short questionnaire has been developed in order to obtain the input and feedback of stakeholders and can be found on the webpage.

MCSS values the views of the stakeholders and remains committed to engaging with the community as both active participants and beneficiaries of conservation efforts in the marine park.

The website and questionnaire can be reached via the following links or the QR code below.

*The Restoring Marine Ecosystem by Restoring Coral Reefs to Meet a Changing Climate Future is a regional 6-year project funded by the Adaptation Fund and administered by UNDP.

Seychelles engages in major clean-up activity ahead of Easter |26.03.2021