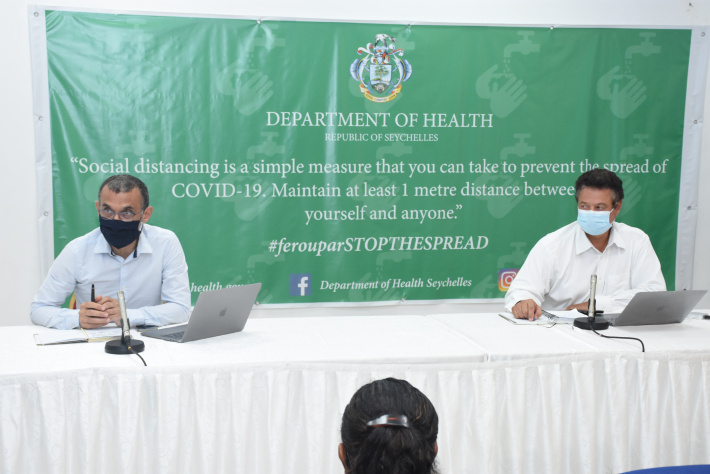 As of yesterday, some 50,000 people had taken their first dose of Sinopharm and Covishield vaccines.

Meanwhile, as the restrictions imposed on the country will expire on February 28, a new Public Health Order will soon be published.

This was announced by the Public Health Commissioner, Dr Jude Gédéon, in the regular press meet held yesterday. He was accompanied by the Health Care Agency chief executive, Dr Danny Louange.

Dr Gedeon also noted that currently Seychelles has 503 active cases including 47 visitors/GOP, five foreign seafarers and crew and 451 Seychellois. Since March 2020, Seychelles has registered a cumulative number of 2562 positive cases with 11 deaths and 2048 recovered cases. Among the cases, so far 218 health care workers have been infected and 200 have recovered.

“Only 18 cases are active right now and it includes all categories within the Ministry of Health. Most of the active cases are among the 20 – 54 years age group. Unfortunately the old people with complications are being affected. The situation at IOT also has been stabilised and we also had an active vaccination campaign to control the outbreak of Covid-19 in that factory,” said Dr Gedeon.

As of yesterday, almost 24,000 people have received their second jab of Sinopharm.

Dr Gédeon noted that to be fully protected people are advised to take both doses.

“On the world stage, Seychelles is ranked second in terms of the rate at which the population is being vaccinated. We should not take this for granted as the government is doing its best to make these vaccines available to the Seychellois. The staff of the Ministry of Health are also working hard to make it possible. In Africa, there are only four countries that are being able to administer vaccines to their population. We are just behind Israel in this campaign and the population needs to acknowledge and appreciate that. We all have to support this campaign in order to allow us to resume a ‘new’ normal life style where children can go back to school and businesses resume with their activities. Do not take the vaccine for granted!” stated Dr Gedeon.

Giving an update on the quarantine situation, Dr Louange stated that at the Family Hospital at Perseverance there are currently 15 patients.

“Most of the patients are in moderate, severe and critical stage. Four patients are in Intensive Care and two are on ventilators. One patient’s situation is quite critical and is also on other medications. Of these patients, only three do not have previous chronic sickness. At the Coast Guard facility, there are 10 patients and among them are two suspects awaiting confirmation of their status. At Avani there are 77 persons tested positive and at Beau Vallon Bay Hotel we have 53 people. On Praslin we have 16 patients at the Indian Ocean Lodge and at the Pension Fund Facilities we have 12 people. On La Digue, there are 16 people at Villa Veuve. Many patients have been discharged since yesterday and we still have rooms available to admit people needed to be isolated,” Dr Louange said.

Do we have the new strain in Seychelles? Dr Gédeon explained that they have been in contact with several laboratories and the samples are ready to be shipped. “Now through WHO, we will have to ship the samples to a laboratory in Nairobi as access to South Africa is not possible right now.”

For those who missed the second dose of Sinopharm, Dr Louange stated that there is a team working on that so that all people get the chance to get vaccinated.

“We are also focused on administering the first dose of Covishield and we are planning to release the schedule of vaccinations for two to three days in order to bring more clarity.”

Regarding specialist clinics, Dr Louange explained that “with this outbreak, we had to prioritise our operations and much energy had to be put into containing the crisis. We are aware that this will have an effect on the whole health system and now that we destabilised the deployment of staff, we ask the public to wait and by next week we will open yellow roof for specialised consultation”.

Regarding the opening of restaurants, gym, spas “reviews are being relooked at as they will have to have a stricter checklist. We had a meeting with SCCI this morning and we agreed that businesses need to start operating with certain conditions. We have received applications from 591 businesses and we have reviewed 561. Some grocery stores were asked to close their doors as they were not respecting the health guidelines. I really appreciate the pro-activeness of SCCI and its members to come forward with suggestions. Having said that, activities that bring large crowds, like open bars, sports, discos etc are still prohibited. The outbreak should be better controlled before giving permission to these businesses,” explained Dr Gédeon.

Will school reopen in March? “For schools, at the end of January we stated clearly that our objective was to vaccinate most of the staff working in schools. Research has shown that transmission in schools is mainly through staff. We are happy to note that most of the staff from most of the schools have been vaccinated but still there is a group that do not want to take the vaccines. The Ministry of Education is currently working on the percentage of staff who had the vaccines. Post-secondary schools as from next week will start preparing for the re-opening of the institutions sometime in March. For primary and secondary we have not decided on a specific date. We do not know if they will be able to open their doors this term or wait for the next term. It all depends on the conditions they have.”

Effect of Covid-19 on children

According to the figures so far more than 100 children have already had Covid-19 and the symptoms are mild. “Some of the children who previously had respiratory issues developed some more severe symptoms. So far they have recuperated well.”

Dr Gédeon sadly notes that even if restrictions are still in force, people are still having parties and getting infected.

“Even if spot fines are being given, people are still having gatherings. If our mentality and our way of doing things do not change we will not be able to manage a pandemic. This is the responsibility of each and every one of us to be part of the solution instead of the problem!”