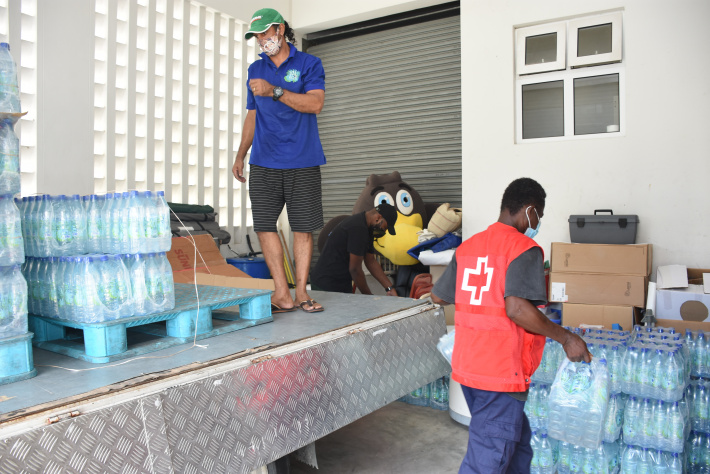 Being a front-liner in the ongoing national immunisation campaign to mitigate the spread of the Coronavirus (Covid-19) in the country, the Red Cross Society of Seychelles (RCSS) is receiving the support of more partners in favour the cause.

Local mineral water bottling company Eau Val Riche and sister company Quench Distribution yesterday presented the RCSS with a consignment of 320 packs, or 3840 bottles, of mineral water which will be distributed around the various vaccination centres on the island.

It was sales manager Helene Labrosse who handed over the donation to administrative officer of the RCSS, Salima Frederick, in the presence of the society’s secretary general Marie-May Bastienne and staff members of both parties.

Ms Labrosse explained that the donation is their way of showing the appreciation and acknowledge the hard and noble job being carried out by the RCSS, especially during the Covid-19 pandemic.

She noted that as part of their policies, both companies believe in giving back to the community where they operate.

She also commended the RCSS for its fantastic job, not only during the ongoing pandemic, but also throughout the years where it has been in the forefront, dealing with various disastrous situations, as well as giving training and promoting educational programmes.

On behalf of the RCSS, Ms Frederick thanked the sponsor for its generosity which she said will be put to good use and will benefit members of the community, as well as the medical staff who are directly involved in the vaccination programme.

The source of the Eau Val Riche pure spring water originates from the fertile green mountains of the Seychelles National Park situated on the lush island of Mahé.

Sourced in the mountains, the water travels down to pressure tanks where it runs over sand and carbon filters to filtrate any impurities.

It is then passed through ultraviolet light, which disinfects bacteria from the water by killing harmful pathogens and destroying microorganisms, which can cause illness.

The water is then micro filtrated and ozonised to kill any metals into insoluble particles.

Following the processes, the water is stored in two holding tanks within the factory, which is then used for refilling in 500ml, 750ml, 1L, 1.5L, 5L and 20L bottles.

The RCSS was founded in August 1989. With the enactment of the Seychelles Red Cross Act of 1991, the society was officially recognised as a voluntary relief society and auxiliary to the public authorities in the humanitarian field. In accordance with provisions of the First Geneva Convention, it was established as the only National Red Cross organisation authorised to carry out its activities in Seychelles territory.

Its constitution is based on the Geneva Conventions, which Seychelles is party to and on the seven Fundamental Principles of the Red Cross and Red Crescent Movement.

In relation to the public authorities, the RCSS maintains an autonomous position that allows it to act at all times in accordance with the seven principles that underpins the Red Cross/Red Crescent worldwide. The RCSS is a member of the International Federation of the Red Cross and Red Crescent Societies, the world’s largest humanitarian organisation. 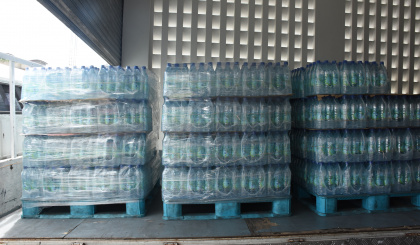 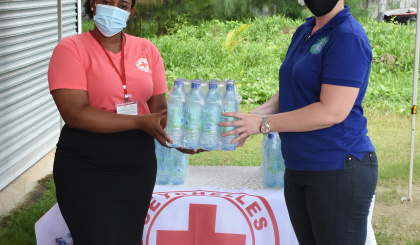