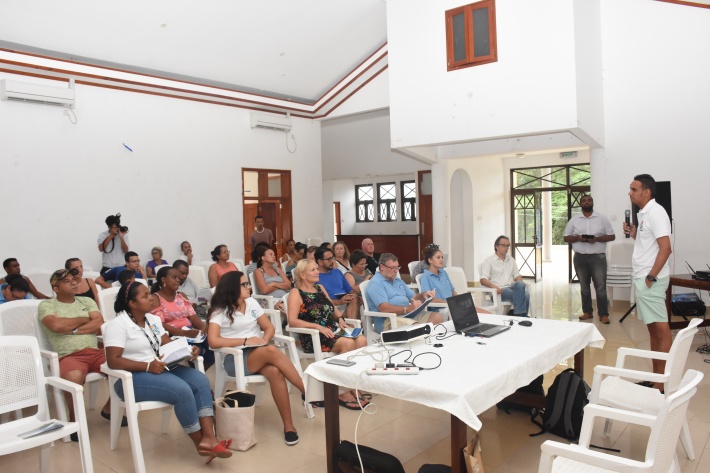 PS de Comarmond addressing the gathering at the meeting

Members of the public have expressed their support for the case for the nomination of Grand Police as an area of outstanding beauty and protected status.

They did so at a public meeting held at the Takamaka community centre on Saturday afternoon.

The meeting, organised by the Marine Conservation Society Seychelles (MCSS) and the Ministry of Environment, Energy and Climate Change, saw good turnout and support from the local community and advocates for the preservation and conservation of the environment.

Principal secretary for environment Alain de Comarmond addressed all present and detailed the processes and the outcomes of the meeting.

“All throughout 2018, MCSS, the ministry and consultants worked on the proposals. For this sitting, we will showcase the work that has been done to show the justification of the biodiversity value of the area and hopefully justification of why Grand Police merits protection. From this public meeting, we will start the approval process and the culmination process with government, outcomes of the meeting will be presented to cabinet on the technical aspects, the legal options, the nomination designation options and for the approval to start formally for Grand Police to be a protected area,” PS de Comarmond stated.

During the meet, several presentations were facilitated on the history of the Grand Police Area, the conservation values of the area as well as the proposed management and business plan summary for the area.

The proposed Grand Police Area of Outstanding Natural beauty comprises two large parcels of land, namely, T575 and T754, which run from the mountain top to the coast.

Following public opposition and a petition against a proposed touristic development, the cabinet of ministers announced in 2017 that the government would engage with the owners of T575 for the land to be returned to the State and be declared a protected area.

As a public meeting on October 21, 2017, it was announced by MEEC that the whole parcel T575 was to be protected and not just the wetland. Also a small part of the adjoining parcel T559 would be included as the wetland crossed in to this parcel. The nomination thus includes both parcels T575 and T574, as well as the small corner of T559.

Explaining the rationale for the nomination, project leader for the MCSS, Rabia Somers, noted that the conservation values of the area are exceptionally high on account that it is the second to last remaining intact Ridge to Reef system on Mahé and the only intact system to incorporate extensive wetlands.

The Grand Police wetland is one of the best preserved in Seychelles spanning an area of 56 hectares, of which approxiametly 18 hectares are open freshwater.

Ms Somers made reference to the findings of biodiversity assessments carried out by MCSS through funding from the Critical Ecosystem Partnership Fund, and the various endemic plants, birds and animals who thrive in the area and some of which are geographically limited to the environment at Grand Police.

“There is a need for managed access in the area to minimise some of the risks that are currently taking place in the area due to unregulated access. The Grand Police area has the highest number of turtle nesting failures due to human activity, litter, poaching and turtle nests being destroyed by dogs,” she said.

Ms Somers noted that the ministry and MCSS wish to promote use of the area for recreational and educational purposes to allow everyone to be able to access the Key Biodiversity Areas (KBA) identified during the biodiversity assessments.

Following Ms Somer’s presentation, consultant James Millett, who prepared the proposed management and business plans, took to the floor to explain the content of both documents.

The five-year management plan for the proposed protected area sets out the actions required to develop the area in a way that will protect the natural heritage and maximise sustainable public access and enjoyment, thereby working towards the vision for the protected area.

The management of the area will require the establishment of a conservation and administration centre located close to the existing prison, taking advantage of the existing infrastructure and creating a hub for the reserve including visitor facilities away from the sensitive beach area and in a location that is resilient to future climate change.

Furthermore, habitat restoration will initially be concentrated in the area of the beach back and wetland areas and will recreate coastal forest habitat for globally and nationally threatened species, improve visitor interest and increase ecosystem resilience.

Grant funding has already been secured under the Ridge to Reef GEF project to establish species protection, rehabilitation and scientific programmes. Additional funding mechanisms provided for in the proposed plan include the implementation of a paying volunteer scheme whereby international volunteers pay to work and gain experience of reserve management and the renting of accommodation and laboratory space for visiting researchers to complement the management of the protected area.

There was general consensus among those present for the nomination and those present voiced their support for the proposed management plan and accompanying business plan.

Suggestions made by the public will be included in the nomination file to be presented to the cabinet of ministers in the near future for the area to be afforded protected status for the benefit of the biodiversity and the local community.