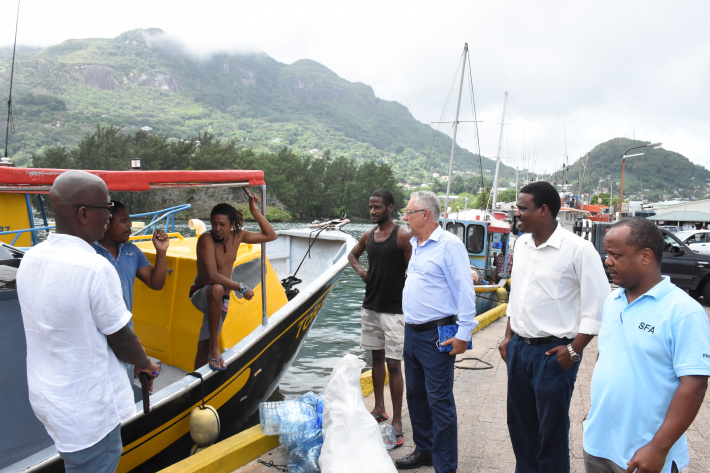 Designated Minister Jean François Ferrari, who is also the Minister for Fisheries, has praised the staff of the Seychelles Fishing Authority for the good work they are doing and has extended to them the government’s full support.

“I have taken into account that the Seychelles Fishing Authority (SFA) has a team of well-trained professionals with lots of experience to move the fishing industry forward and that in itself makes me very proud. We have to valorise all of the experiences available to make the industry grow to the level where it will be among one of the top pillars of our economy,” Designated Minister Ferrari said, noting that government will give the authority its full support while also respecting its autonomy.

Designated Minister Ferrari made the comment yesterday morning while touring the SFA facilities and head office at the Fishing Port, including some services transferred to the Espace building due to fungus problem in some offices of the headquarters where they were located.

He said that while government supports most of the policies in place, it will review some and also come up with new ones that will get to move the fishing industry forward, within a space of time, with the involvement of the private sector.

He said this will have the private sector getting involved in value addition products, venturing into tuna vessels and the SFA liberalising some of its activities such as ice production.

“It’s not about fishing in quantity but sustainably, how we make the most of the limited resources that we get and transforming those into high value added products for the local and international market. That is lacking at the moment,” Designated Minister Ferrari added, noting that while government sees it fit to market tourism through the Seychelles Tourism Board (STB), some kind of similar mechanism is also needed to market our fish abroad.

“We have to find a way to make known that we possess the best fish in the world,” he said, stressing on government’s commitment to renegotiate some policies with the European Union (EU) with regards to the already signed fishing agreement, so that we get more benefits from our blue gold which is being exploited.

He said that he will see that SFA gets land for shore-based activities and the staff continue to receive training and work in better conditions.

With regard to Seychelles having its own tuna fishing vessel, Minister Ferrari noted that government will facilitate and will encourage Seychellois to venture into the business.

He called on SFA staff to partner with him in getting the fishing industry to flourish for the benefit of the country.

SFA chief executive Nichol Elizabeth said he was happy that Designated Minister Ferrari visited the SFA as it was an opportunity for the staff to meet up and discuss with him for the first time.

Mr Elizabeth, who was only appointed SFA chief executive in September this year, noted that some of the challenges being faced by SFA include constraints in ice production although now production has reached nearly 70%, abuse of the fuel concession policy by some fishermen and inconsistency of leadership within the authority.

Mr Elizabeth said the SFA will focus more on value-added products and will do outreach programmes to get people, especially young people, to get involved in setting up such value addition businesses.

He added that SFA is working to install monitoring systems on all registered mini Mahé boats by 2021. He claimed that this will allow SFA to monitor the amount of fuel used under the concession programme.

Designated Minister Ferrari was accompanied on the visit by the principal secretary for fisheries Jude Talma.

He started the day at 8.30am with a meeting with the board members at Espace building followed by a visit to the IT section located on the second floor and the monitoring, control and surveillance, and enforcement department located on the third floor of the building, where he got to interact with staff.

SFA moved some of its services to the Espace building because of the fungus infection at the SFA headquarters.

From Espace building, Mr Ferrari visited other services still ongoing at the SFA at the New Port and the functioning of the port and ice plant at the fishing port where he got the opportunity to discuss with some fishermen and boat owners.

The accompanying photos show some highlights of Designated Minister Ferrari’s visit to the SFA yesterday. 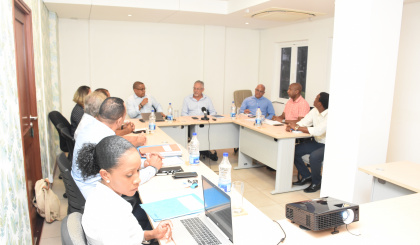