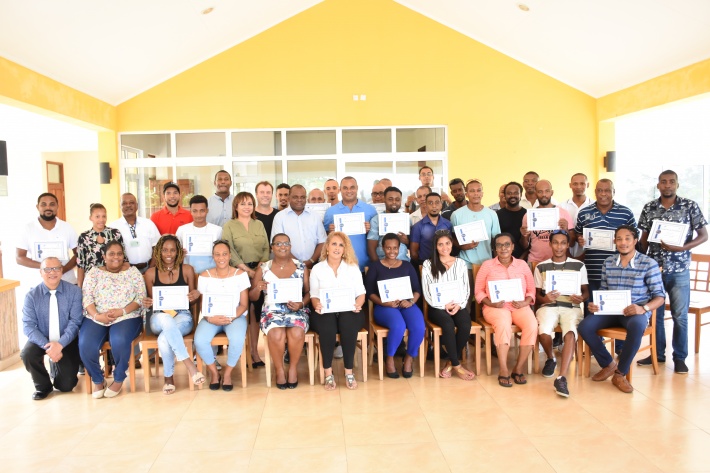 The tour guides posing with their certificate

Thirty-nine individuals have completed a basic course in tour guiding, organised by the department of Tourism and the Seychelles Tourism Academy (STA).

The group received their certificate of competency in a short ceremony at the STA campus from the hands of the Minister for Tourism, Civil Aviation, Ports and Marine, Didier Dogley; the principal secretary for tourism, Anne Lafortune; the principal of STA, Flavien Joubert and the chairman of the Tour Guide Association, Barney Adeline.

Minister Dogley congratulated the new batch of individuals pursuing their ambition to start their tour guiding operations and called on them to put their improved knowledge and skills to good use.

“I am very pleased to see such a large cohort that has taken the challenge to become a tour guide. It’s a profession that is very rewarding as you get to meet a lot of people,” he said.

The minister added that the one week training that was given was not enough as the participants need to build and add to the training that they have received.

“You need to build on the knowledge that you have received because at the end of the day the tourists will be looking at you for a nice day out, you are front liners who get to interact with visitors to our shores and our aim as the department of Tourism and STA is to help raise the level of service be it from the hotels, tour guides, commission agents, among others, by organising such training,” he added.

Martina Luther, a participant in the training, said: “We have learned how to deliver a proper tour guide as well as being equipped with the proper knowledge, all in all it was a very informative training and I plan to use the knowledge I have received to start my own side business.”

Rodney Dubel, who has been a tour guide for eleven years, noted that the training gave him more knowledge on tour guiding which he will be using while running his business.

During the four-day training conducted by STA’s head of studies, tourism and tour guiding, Merna Lajoie, the participants were given the basic knowledge, skills and attitudes needed when conducting tours of the island. Topics covered include the role of a tour guide, communication skills, hints on how to interest a client, basic information on flora and fauna, as well as the geography and history of Seychelles.

“We also had a practical session where they all had to conduct part of a tour of the island, as a way of putting into practice what they learnt during the sessions,” said Ms Lajoie.

Aside of those employed by destination management companies, the majority of tour guides in Seychelles have got their own private business. The basic course in tour guiding is one of the most important prerequisites for new applicants wishing to become licensed tour guides. The license is issued by the Seychelles Licensing Authority, and there are other requirements, including a basic training in first aid.

Ms Lajoie noted that they have been receiving increased demand for such a course from prospective tour guides. The training is the first to be organised this year, although the department of Tourism has been organising such training for several years in collaboration with STA.

A similar course is planned for December.