Logistical lapses have had no impact on election results, says EC |30 October 2020 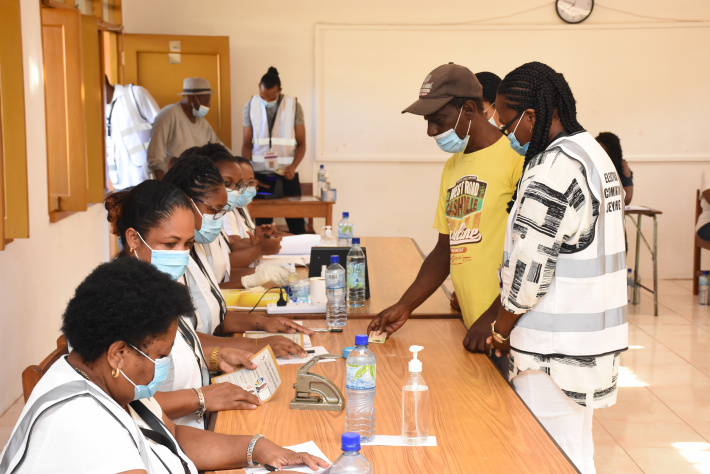 The Electoral Commission has acknowledged that there have been some logistical lapses during the October 22-24, 2020 elections but has pointed out that these

were promptly addressed as and when they happened and in no way have affected the outcome of these elections.

The Electoral Commission said this in a press release, the full content of which reads:

“The Electoral Commission’s mandate is to run impartial, fair, and transparent elections according to law. Emphasis has been given throughout the electoral process on consultation with all stakeholders particularly political parties.

“Following the approval of the electoral reforms the Electoral Commission reviewed and introduced a number of practices and processes conform with these recommendations aimed at modernising elections in Seychelles. The amendment in the elections act to separate the Commission (chairperson

and members) and secretariat, presented challenges in recruiting the number of staff to be in line with the new legal framework. The Commission was presented with the opportunity to recruit a group of young professionals who were willing to take the challenge and be trained to take over from those who were retired to ensure continuity in the number of experienced staff conducting elections in

“The Commission is the first to recognise that there have been some logistical lapses. However, these were promptly addressed as and when they happened and in no way have affected the outcome of these elections. The Commission is conducting its necessary internal processes to address these issues and make necessary recommendations for improvement in practices and legal framework.

“In relation to the incident that happened at the Beau Vallon polling station, both an internal and police investigation has been launched to clear up the matter after which the Commission will give a formal statement.

“The Commission wishes to reassure the public that the boxes found does not affect in any way the results of the elections.

“The peaceful transition of power speaks greatly of the transparency of the electoral process despite the many logistical challenges. Preliminary reports from the Eastern African Standby Force (EASF) and the Citizens Democracy Watch Seychelles (CDWS) indicate that in their observations the elections were transparent, free, and fair. We have also received positive feedback from the local diplomatic community to that effect. The Commission also notes positive feedbacks from the outgoing and incoming presidents as well as the Human Rights Commission and Citizen Engagement Platform Seychelles (Ceps).

“The Commission affirms that it has at no point been influenced in any way by any particular entity prior to and during the three days elections were held.

“The Commission would like to take this opportunity to thank the Seychellois electorate for the very high turnout for these two very important elections. We noted a turnout of as much as 92% in some electoral areas. The overall turnout for the presidential and National Assembly elections is at a high of 88%.

“The Commission also thanks all partners who have supported us in one way or another during this electoral period.”

Press release from the Electoral Commission