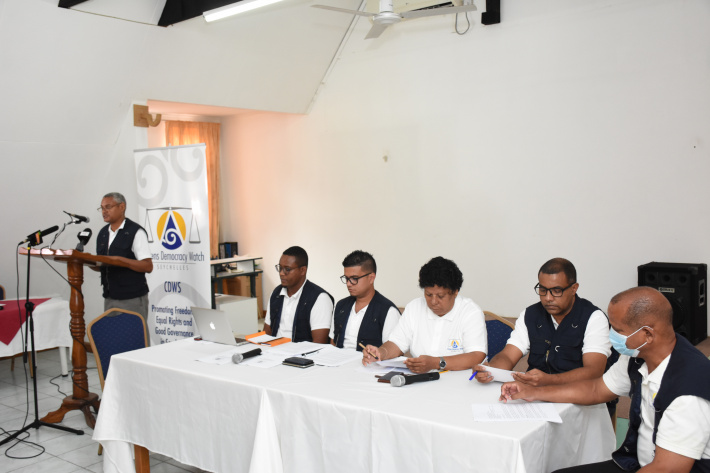 The Citizens Democracy Watch Seychelles (CDWS) has said that the Seychelles’ presidential and National Assembly elections were generally conducted in a peaceful atmosphere and in a transparent manner.

It was the chairman of CDWS, Gerard Lim Sam, who made the statement in the organisation’s preliminary report on the general elections held from October 22-24, 2020.

Mr Lim Sam noted that CDWS will continue to observe the post-election phase while its final report and recommendations will be submitted within the next thirty days.

He said that CDWS recognises the efforts of the Electoral Commission (EC) in organising the general elections in such a short period of time.

He said CDWS congratulates the citizens of Seychelles for their peaceful conduct throughout the elections.

“CDWS encourages all Seychellois to continue playing a constructive role in strengthening our country’s democratic processes, bearing in mind that a credible and legitimate election is a key building block towards political stability, democratic governance and socio-economic development,” he said, reaffirming the organisation’s commitment to actively engaging and promoting the fundamental principles of democracy and good governance.

A group of 31 observers were assigned to observe the elections.

Mr Lim Sam noted that since the proclamation of the presidential and parliamentary elections, CDWS observers have been visible in various parts of the country interacting with key stakeholders, observing voter registration, nomination day, campaigning, voting process, transfer of ballots, sorting of ballots cast at special polling stations as well as media monitoring.

He said that the scope of observation was not restricted to the polling stations only but additionally including patrolling the communities and responding to complaints and reports of alleged illegal activities, received through its hotline service.

In sharing CDWS’ preliminary observations, findings and recommendations, Mr Lim Sam stated that the observer mission appreciated the efforts made by the Electoral Commission for organising both elections despite facing several challenges, for instance, the implementation of the mandatory requirements imposed by the Public Health Authority due to the Covid-19 pandemic.

He said that one of the challenges faced by the Electoral Commission was the lack of experience of the newly recruited team in the management of elections.

He noted however, there was commitment to deliver.

With regard to polling day observations, he said that the majority of special voting stations did not open and close on time as prescribed by law.

He further said that the mission did note that delays in opening were compensated to allow voters to exercise their right.

He said the opening and closing procedures took place in accordance with the provisions of the Elections Act.

The following are some other preliminary findings presented:

Location and layout of polling stations

• the layout of some stations promoted easy flow in the voting process, however it was observed in some polling stations the layout was confusing.

• there was a lack of consistency in queue management, no clear demarcation or signage for queueing

• the positioning of the polling booths compromised the secrecy of the ballot,

• Election materials were available in most polling stations, however there were unacceptable shortages of ballot papers in many polling stations causing unnecessary delay in the voting process

• Inaccurate list of voters for special polling which resulted in unacceptable delays and inconvenience.

• Management of the special stations for essential services was not in line with provisions of the Elections Act.

• Voters at special polling stations had difficulties in sealing envelopes

Sorting and classification of ballots from special stations

The mission notes that the process was done in a transparent manner, despite long delays. The mission observed that there were inadequate human resources to undertake the task given that there were two elections being held simultaneously. Some discrepancies were observed in the tallying of ballot envelopes and the list of voters from special polling stations.

A number of checkpoints were identified where there were alleged vote buying and voter intimidation. The mission noted and observed political activists loitering and interfering with voters within the precincts of the polling stations. Some political activists accompanied incapacitated voters more than twice to the polling stations and they exploited the stream system.

CDWS noted that additional personnel were recruited to service the polling stations. However, there are concerns concerning the impartiality and independence of some of the staff working at different polling stations as some are known political activists and were seen sporting party regalia during recent campaign meetings and also expressing support for a political party or another on their social media account.

Counting, tabulation and announcement of results

Most presiding officers generally adhered to counting procedures. CDWS observers and party agents were present throughout the process. CDWS noted unnecessary delays in the counting of votes and recommends that EC establishes a timeframe that counting should be done after closing of the polling station. The mission observed that there were some challenges in reconciling the number of ballots cast.

The mission also noted that there were long delays in the announcement of the results which took place at the EC headquarters. Some results were announced over 12 hours after the closure of polling stations. However, the mission noted errors in the presentation of results. CDWS also notes that the swearing in ceremony of the President-elect was held on Monday October 26, 2020.

The mission recognises the efforts made by the Electoral Commission to educate voters, however, the mission concluded that the quality of civic and voter education was inadequate and short-term. The mission feels that the EC should have a continuous voter education programme throughout the election cycle.

The mission noted that the voters register remained closed as stipulated in the Elections Act. Through various consultations, the stakeholders expressed concerns about disenfranchisement of voters, people with special needs and remanded persons.

Reluctance on the part of the Electoral Commission to engage with civil society partners in the implementation of the Youth Register 2 Vote project initiated by the Seychelles National Youth Assembly and CDWS was also noted. This project aimed at encouraging young voters to participate in an informed and responsible manner in the electoral process: To register and to vote.

Stakeholders consulted expressed concern about the administration of documents required for Nomination Day. Some stakeholders are of the view that there should be more flexibility and more time allocated for verification of nomination documents by the Electoral Commission and that the process should facilitate rather than prohibit the right of a person to stand as a candidate.

CDWS notes that there were discrepancies and inconsistencies in the accreditation process of observers. Through consultations undertaken, some stakeholders expressed concerns about delays in processing accreditation of stakeholders (parties).

The mission noted that the dissolution of the National Assembly and the proclamation of the general elections generated stiff political competition, tension and anxiety among the parties and their supporters.

The campaign period was marked by verbal or physical acts of provocation, alleged intimidation and threats, defacing of billboards, fear-mongering and hate speech/abusive languages. The mission also noted that on polling day some voters received phone calls urging them to cast their vote in a particular way and in some instances SMS’ requesting them to refrain from voting.

The mission observed that the regulations pertaining to the affixing of posters and billboards were not necessarily adhered to. Stakeholders brought to the attention of CDWS that the complaint mechanism put in place by the Electoral Commission was not effective. The mission also observed that in some instances, the social distancing measures were not adhered to by political parties.

Use of State resources

The mission received reports of alleged abuse of State resources including the time of some civil servants for campaigning while they were working in their official capacities.

The mission observed that the state-funded national broadcaster the Seychelles Broadcasting Cooperation (SBC) was fairly impartial and that airtime was allocated for Party Political Broadcast (PPBs) as specified by law. However, CDWS notes the discrepancies in the law that discriminates against independent candidates, allocating less airtime to them compared to political parties. Two presidential debates, as well as profiles of the candidates played a major role in informing voters about the three candidates’ lives as well as their plans and programmes. CDWS is of the opinion that airtime for independent candidates should be equitable as that of other parties.

The mission observed that there was extensive coverage of elections in the private broadcast and print media and there was wide usage of social media for campaigning by political parties and citizens. CDWS notes that there was a new code of conduct for journalists which was challenged by the Association for Media Practitioners. CDWS observed that there were inconsistencies in adhering to the regulation for photographing and filming inside polling stations.

CDWS commends the police for its professionalism in response to reported and observed cases throughout the electoral process. In some cases, their presence was quite noticeable and unobtrusive. However the mission notes that the police played a more passive role at the polling stations in view of new instructions.

The preliminary presentation was followed by questions from the floor. 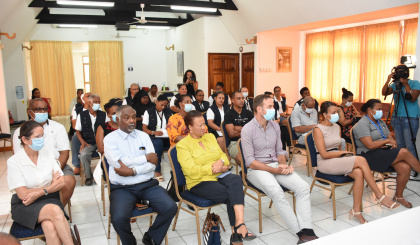