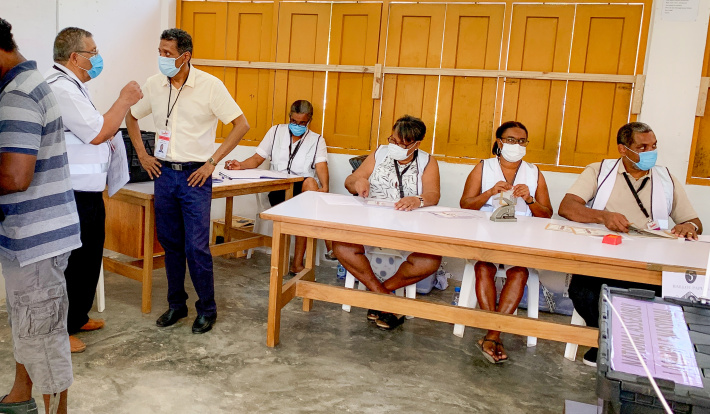 By 6.55am, the sun was already shining brightly and a queue of more than 300 voters was visible at the Baie Ste Anne Praslin polling station, situated at the district’s primary School.

Amongst them were several elderly and disabled individuals who had thought of coming early in order to not wait for a long time. The station opened its doors at 7.30am and that caused much frustration amongst those who were waiting. By then, the Red Cross Society staff were already busy with a few cases of fainting amongst the elderly.

“This was mainly related to the fact that some of these elderly voters had not taken a good breakfast and others had underlying illnesses,” Anita Soumery, representative of the Red Cross Society told Seychelles NATION. She highlighted that things were running smoothly, although the temperature was particularly high.

A total of 3,444 voters have registered to vote at the station and 45-year-old Germain Rose led the way as the first voter. Rose had reached the station at 2am to ensure that he is amongst the first to vote.

“This morning, we were ready by 6.20am to start the day. However, we had to read out the list of voters who had voted at the various special stations during the past two days, a total of 101 voters. Thus the delay in the opening time,” said Luciana Lagrenade, electoral officer of the station.

As per Mrs Lagrenade, the main issue which they encountered in the morning was a lack of shade at queuing areas and voters thus not cooperating to queue up as requested but rather choosing to group in certain areas. However, this issue was tackled during the day as queuing sequences were slightly altered. She expressed her satisfaction towards the voting process, praising the electoral team of the station for their good work but called for greater cooperation from voters. Mrs Lagrenade is replacing Steve Thelermont who fell ill last night and could not travail to Praslin.

By 10am, a total of 759 voters had cast their votes and the figure stood at 1,618 by 1pm and 2,117 at 4pm. The queues were moving relatively fast except the ‘G-M’ line which was particularly slower, due to a high concentration of voters which falls within that category, especially the Lesperance.

As for electoral staff of the Grand Anse Praslin voting station, they were in by 5.30am to start preparation for the voting process and they were ready in due time. At exactly 7am, the station situated at the Praslin secondary school opened its doors to welcome voters.

“We did have a slight issue this morning when voters were not queuing as per our request due to lack of shade but eventually we managed to sort it out,” electoral officer for the station, Stephen Rousseau shared.

Mr Rousseau expressed his appreciation of the smooth running of the voting process and the good liaison between all stakeholders. “Things have been going well so far and by 10.15am, 750 voters had cast their votes. We have adequate ballot papers and I believe so far things are progressing at a good rate. This morning we had a lot more people but now there is less and the queues are moving quite fast,” he added.

A total of 2,810 voters are registered to vote at the station and voters expressed their satisfaction towards the smooth running of the station.

The Red Cross Society also shared the same view. “So far we have received only one casualty and all is going generally well. We have been assisting voters with seating facilities for the elderly and disabled as well as water in a few cases. The queues seem to be moving at a good speed and all is well,” said Marianna Duprès of the Red Cross Society.

At both stations on Praslin, voting were conducted by alphabetical order in the presence of observers from the different political parties, Association for Rights, Information and Democracy (Arid) and Citizens Democracy Watch Seychelles (CDWS). 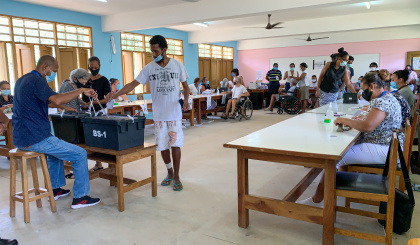 Voters waiting to cast their vote in Baie Ste Anne 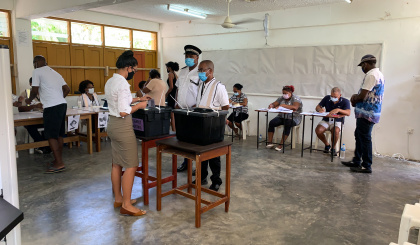 A voter casting her vote at the Grand Anse Praslin station