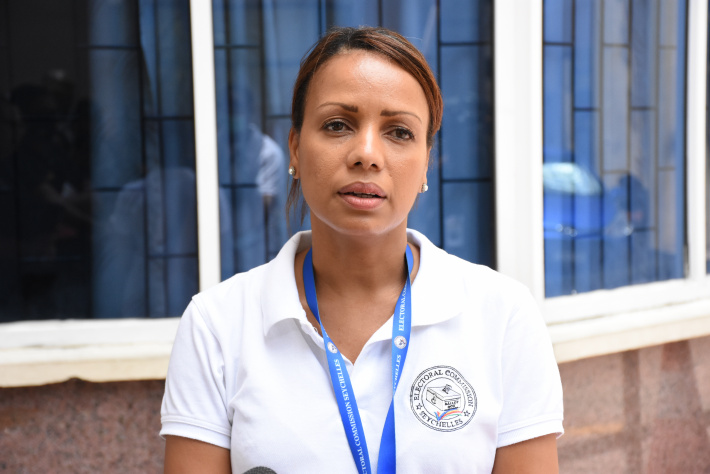 As at midday 24,132 voters out of a total of 74,634 eligible voters had already cast their votes at the different polling stations and this is equivalent to 32.3%, the chief electoral officer Manuella Amesbury has said.

Speaking to the press on the voting process after midday she said that reports from the different electoral areas confirm that the election process is going well, except for some delays in some areas related to the sorting of ballots for people who had already voted  at special stations.

She acknowledged that a number of polling stations opened late but the majority of them opened as scheduled.

“The voting process is going on quite well and we are in touch constantly with the different electoral officers and I am happy to say that we have made a lot of improvement compared to the first day of voting,” Ms Amesbury stated.

She pointed out that communication between the Electoral Commission headquarters and the different stations is taking place by fax machine and this is taking some time. But she stressed that all the stations that have suffered delays in opening will have their closing time extended.

She admitted that the sorting out process has taken much longer than they expected because a lot more people voted in the special stations.

Mrs Amesbury noted that other issues that are being recorded are that there are people who did not check their names on the lists but turned up in a particular station only to find that their names are on the register in another district.

Ms Amesbury has called on people to go and vote now and not to wait until late.

The special polling station at National Housed closed at 12.40pm and the electoral officer there Franky Laporte said that by noon more than 340 people had already voted and at 12.30pm there was nobody in the queue.

Around 240 people were expected to vote there but 340 turned up.

1,000 people had cast their votes by 2pm in Roche Caïman

In the district of Roche Caïman, the smallest electoral area with only 1,990 voters, 1,000 of them had exercised their civic duty by 2pm and there was nobody in the queue then.

The electoral officer there Alex Souffe is calling on the remaining 990 eligible voters to come and vote now as it is an opportune time as there is nobody in the queue.

The polling station for Roche Caïman voters is at the Plaisance secondary school.

Voting at Baie Lazare is taking place at the primary school and the electoral officer is Russel Finesse.