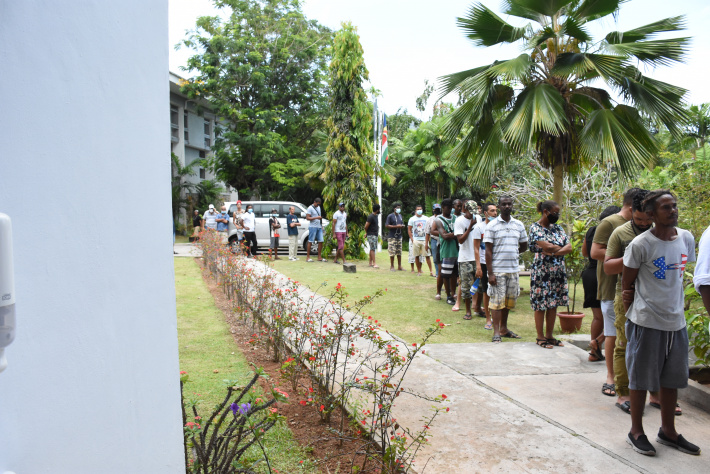 People who have been queuing long before the expected opening of the polling station at 7am were disappointed as it was at around 8.10 am that it opened and the delay was due to the length of time it took to sort out the votes of people who had already voted at the special stations.

Ramona Esparon, the electoral officer for the district, stressed that they were ready to start at 7am and was not expecting the sorting out to take much longer than expected.

She also noted that it was the first time that people at the district are voting in alphabetical order so the process was a bit slow to take off.

At Cascade the polling station is at the primary school and there are 2,785 eligible voters on the list.

The special polling station at National House is for voters from Praslin and the inner islands who are temporarily on Mahe on election day.

There also, when at the opening time of 7am the station did not open its doors and people in the queue started to express their frustration. It was only at 8.40am that the station opened and the electoral officer, Franky Laporte said the delay was due to the sorting out of votes and ticking the names of people who had already voted.

The special station at National House is expected to close at 12 noon.

Even though people there are not voting in alphabetical order, the process was quite slow and by 10.30am only 190 of the around 240 people who are expected to vote there had cast their ballot.