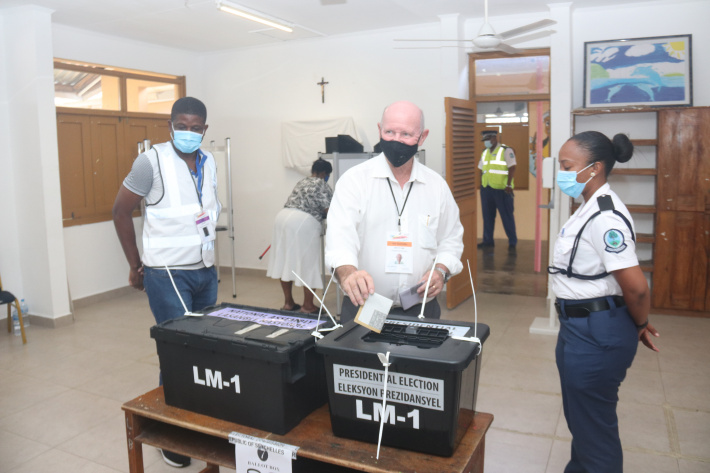 Presidential hopeful Alain St Ange cast his vote at the Les Mamelles polling station for both the presidential and legislative elections.

Accompanied by his vice-president nominee Peter Sinon, he arrived at the station at around 10.45am.

Speaking to the press after he had already voted, Mr St Ange noted that he has been visiting polling stations on La Digue and Praslin since this morning.

He noted that since this morning the election process has been going smoothly with some occasional hiccups such as the long queues.

“The Seychellois people are the ones who decide who their leaders will be, so we must respect their choice no matter what,” he said.

He added that for the first time in history, One Seychelles will be able to break the duopoly that has existed in the National Assembly, noting that they will achieve their target.

Mr St Ange also addressed the seven people on Aldabra who were not able to vote as the Electoral Commission could not send their team to the remote atoll due to bad weather. He remarked that those seven people have been denied their constitutional right.

He also sent out a message of peace to all Seychellois and said that we should all respect each other no matter our political affiliation.

“We have to keep this civility and respect towards one another as Seychelles is too small for us to go to war over political beliefs,” said Mr St Ange.