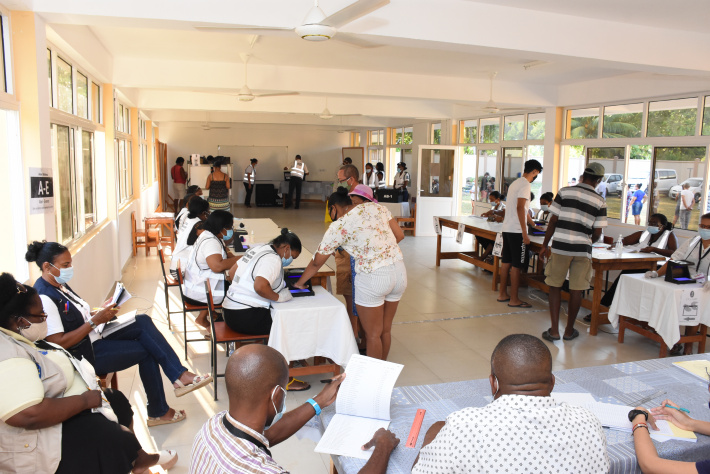 With a queue going from the school gates to the church, the constituents of Anse-Boileau district showed up to practice their constitutional rights.

The gates were officially opened at exactly 7.02am and the 2020 general elections officially began.

Speaking to Seychelles NATION, Donald Zialor, the electoral officer in charge of the Anse Boileau station, noted that the first vote was cast at 7.07am.

“Since we opened the gates we haven’t encountered many problems,” he said

He noted that many elders came early to vote and they are being fast-tracked.

The three candidates vying for a seat in the National Assembly for the district were also present and they all gave their opinion to Seychelles NATION.

Dorina Vidot (One Seychelles) noted that everyone is in action to make sure that the election runs smoothly. She added that through her campaign trail she received many positive feedbacks and she feels confident that the residents of Anse Boileau will make the right choice.

Roger Alphonse (United Seychelles) on his part said that he is happy that the election is going smoothly so far and judging from his campaign he is confident United Seychelles has the Anse Boileau district in the bag.

Philip Arissol (Linyon Demokratik Seselwa) who is running for a second term was very confident that he will keep his seat in the National Assembly. He remarked that he got positive responses throughout his campaign even from the opposition supporters.