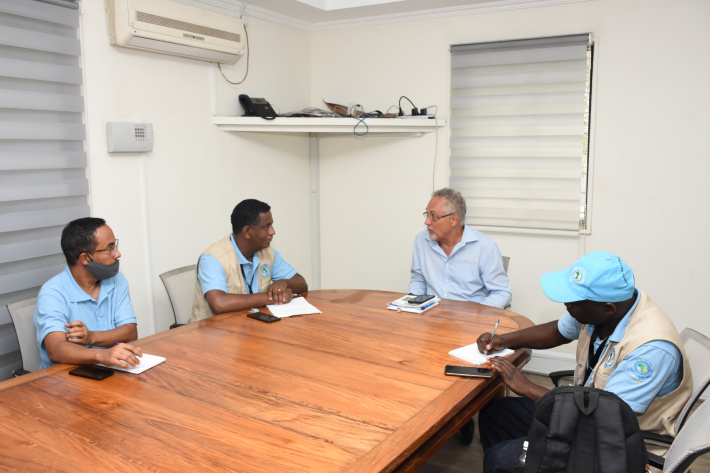 Mr Ferrari during the meeting with the EASF delegation

The East African Standby Force (EASF) headed by Dewitt AssafeWassihun paid a courtesy call on the representative of the Linyon Demokratik Seselwa (LDS) Jean-Francois Ferrari in the absence of presidential candidate Wavel Ramkalawan and party leader Roger Mancienne due to their busy schedule.

The meeting took place at the LDS party headquarters at Lakaz Seselwa, Mont Fleuri. As part of their mission, the EASF met with Mr Ferrari to make the party aware of their presence and obligation in the country with regards to the presidential and National Assembly elections.

Talking to the press after the meeting, MrWassihun noted that “we had these meetings with all the presidential candidates and we raised an issue of the appropriate usage of public resources. The representative of LDS noted that there were so far no misuse of the resources and he is optimistic about the upcoming elections.”

Jules Hoareau, EASF communications manager, also said that LDS confirmed that they are happy with the work of the Electoral Commission and they are also satisfied that the current President, Danny Faure did not use the state resources for campaigning.

“Mr. Ferrari is also happy that the district administration offices have not been used for campaigns and access to media has been distributed evenly. He also shared the concern that in the law there is no proper framework that defines how to do the transition from the current sitting President to the newly elected President.”