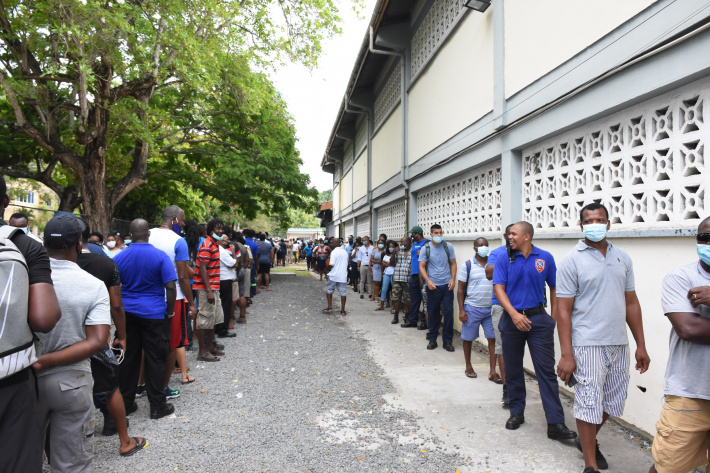 Long queues could be seen at the special polling stations yesterday, the first of three days of voting in the general elections ‒ presidential and National Assembly ‒ and electoral officers had to allow voters to vote even four hours after the stations had closed down.

Yesterday, people cast their ballots in several special polling stations set up on Mahé, Praslin, Silhouette and some outer islands but the process was marred mainly by issues relating to the compilation of the register being used at these stations.

Giving the press an assessment of the first day of voting late yesterday evening, chief electoral officer Manuella Amesbury admitted that there have been a number of challenges in most of the special stations which have resulted in people waiting in long queues for several hours.

Mrs Amesbury pointed out that in several stations long queues still remained for several hours after the polling stations had closed.

She noted that as per the law people who are in the queue at the time a station closes, have a right to cast their vote.

Commenting on the situation at the English River crèche where people who work in essential services and who will be on duty away from their respective electoral areas on election day as well as those travelling were voting, Mrs Amesbury said the number of people who turned up to vote was more than at a normal station.

“The English River special station with 3,368 people on the list to cast their votes turned the station into the second largest after Anse Etoile,” Mrs Amesbury explained.

She said the main challenge that the station faced was with the way the register for the special stations has been compiled which on various instances people’s names did not match all their names on their national identity cards. But she pointed out that all the people who turned up to vote were allowed to do so as there is a provision in the law which states that in such cases an affidavit can be made and a person’s details can be processed so he or she can proceed to vote.

She went on to note that as the problem arose they took measures to mitigate it by increasing the streams to ensure more people were going through at one time.

But Mrs Amesbury highlighted that it is not uncommon for such situation to arise as there has always been instances where some voters will have certain issues with their names during voting where an affidavit is required.

But in spite of this challenge made worse by people expressing their frustration as they had to wait long hours, Mrs Amesbury said the Electoral Commission commended Jerina Ah-Tive, the electoral officer for English River and her team for being able to manage well the situation and the pressure that ensued.

With regard to the special station at the Baie Lazare community centre for voters who are temporarily residing at hotel establishments in south Mahé due to the nature of their contractual agreements based on the Covid-19 pandemic, Mrs Amesbury stated that all the hotel establishments were informed that only one station was to be set up due to logistic purposes and they had to take the responsibility to transport all their staff there.

Meanwhile, Ms Amesbury has stressed that on the main polling day on Saturday such issues should not be as rampant as each electoral area/district has its own specific voter register whereas the one which was used at the special stations is a compilation of different districts/electoral areas.

“We also found that the deadline given for workplaces to submit the list of their employees was not respected as submissions were still coming in after the deadline. We felt that there have been instances where people had wanted to vote at this station to avoid going to vote at their respective stations on the main election day,” Mrs Amesbury pointed out.

She also stated that it has been brought to the Electoral Commission’s attention that a serious offence relating to voting has been committed. This is a case where a ballot paper is being circulated on social media.

Mrs Amesbury has reminded all voters that to do such a thing is an offence punishable by law and the Electoral Commission severely condemns such acts.

“The case has already been handed over to the police to be dealt with as it should,” Mrs Amesbury stated.

Mrs Amesbury said for the time being it is unclear how the person got the ballot paper on social media as no gadgets are allowed in the polling station.

Other than that Mrs Amesbury said all other complaints related to voting and the election itself are being received and compiled by a complaint officer.

Meanwhile, Mrs Amesbury could not give any statistics as to the number of people who cast their votes in the special stations yesterday, noting that the Electoral Commission had yet to receive all the counts from the different electoral officers and this was expected later yesterday evening. 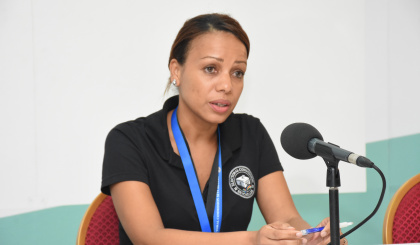