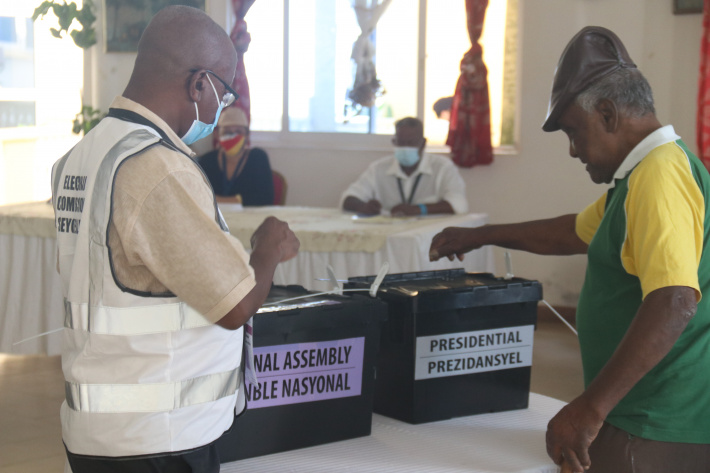 Voting at the North East Point Home for the Elderly (Photo: Jude Morel)

The station, which was operational from 8am to 12pm, saw a steady flow of voters for the important electoral process over the four-hour timeframe, under the watchful eye of local and international observers, namely, Citizens Democracy Watch Seychelles (CDWS), the Association for Rights Information and Democracy (Arid), the British high commission, the embassy of the United States of America and the French embassy and the Eastern African Standby Force (EASF).

Assistant electoral officers and staff of the two facilities were on hand to assist the residents and patients with limited or restricted mobility and others with health-related conditions.

Electoral officer for the Glacis district, Nicholas Shamlaye, who was also in charge of the special polling station, at the end of the process said he is satisfied with how things went despite a slight hiccup which saw four voters having to wait until officials from the Electoral Commission of Seychelles (ECS) brought over ballot papers for their respective districts, as their names had not appeared on the finalised list, on account that they were newly admitted to either of the facilities. The four districts for which ballot papers were not initially accounted for were Bel Ombre, Anse Royale, Au Cap and Inner Islands.

“It has gone very well and we thank everyone who has cooperated, especially our team. As you can see, there are observers, international and local, polling agents and we have been visited by presidential and vice-presidential candidates, as well. With the support of everyone including the police and the management of the North East Point Home for the Elderly, we are doing a good job. There were very few hiccups which we have managed and rectified,” he noted.

“Principally, headquarters says because the list they received was registered in such and such districts but it so happens that sometimes, the North East Point hospital or home takes new residents, clients, and there were one or two whereby we did not have the ballot paper pertaining to their district, but we took corrective action for this,” Mr Shamlaye noted.

In casting their vote, each voter had to go through the seven step process, although some voters were accompanied by another individual, such as a carer. In such instances, a person can only accompany a maximum of two voters and are required to sign affidavits in doing so.

“In the eventuality that a voter fails to provide a form of identification, there have been very few of such occurrence, a witness may certify that it is them, and if they appear on the voters’ register, on the list of residents and the Master Register of Voters, they can go ahead with their right to vote, and all the information is recorded,” Mr Shamlaye further added.