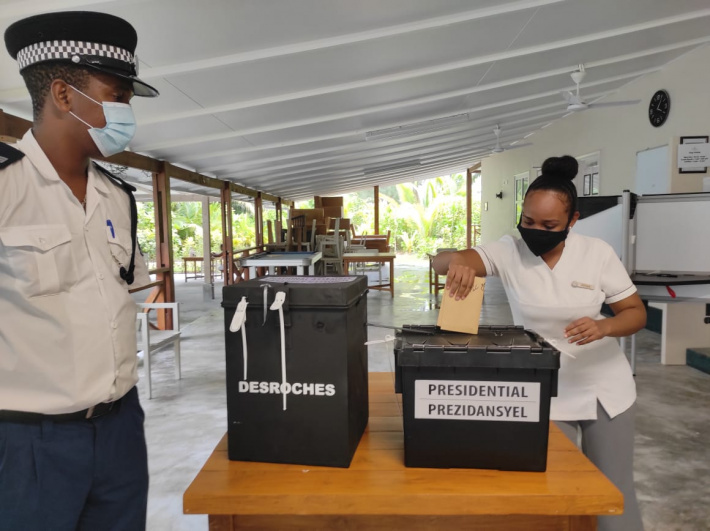 The 2020 general elections kicked off yesterday with the first group of people who are qualified and registered casting their ballots at various special polling centres around the country, with the English River Station (RA) accommodating the biggest crowd of around 4000 voters.

Set up at the English River crèche, the polling station catered for voters who work in the essential services, including members of the Police Force, medical professionals and media personnel among others.

The English River station, which was under the supervision of Jerina Ah-Tive, was also catering for people who will be travelling tomorrow, especially those going for overseas treatment.

Even before the station was officially opened, a large crowd of voters was seen queueing outside the La Promenade Gymnasium (ex-School Meal Centre) waiting to perform their civic duties.

When approached to share their views on the voting process, most voters were complaining on how slow the exercise was being carried out.

Some of them spent more than four hours in the queue before casting their ballots.

Giving updates from the special polling station, Ms Ah-Tive said they started with two lines of voters, but later upgraded to three to speed up the process.

She acknowledged that voting was a bit slow early in the morning, but the process managed to gather momentum later on.

Ms Ah-Tive also added that the station has several hick-ups which triggered the delay, especially some issues with the voters’ register.

Vice-presidential candidate for One Seychelles, Peter Sinon, who was among some of the observers at the station, noted that he was very satisfied with the process, even if he noticed several minor issues which he said were well taken care of.

Other than the minor hiccups, Mr Sinon said he was very satisfied with the process in general.

Meanwhile, another special station at the Remand Centre on Bois de Rose opened at 8am and closed at 12 noon to allow any other persons who happen to be placed on remand that day to vote.

Altogether 32 remandees were expected to vote there.

Benett Accouche was the electoral officer in charge of the station.

The voting process went smoothly there but only 23 people were able to cast their ballots. The nine others were not able to vote as there were certain issues surrounding registration.

The voting process there took place under the watchful eyes of East African Standby Force (EASF) monitors as well as CDWS observers.

There were also special stations at the Berjaya Beau Vallon Bay quarantine centre,

Baie Lazare community centre for people working in some hotels in south Mahé and on the outer islands of Coetivy(for voters on Coetivy and Ile Plate islands), Poivre (for voters on Poivre, Remire, Darros, Desnoeufs and other neighbouring islands) and Farquhar(for voters on Farquhar, Alphonse, Desroches, Providence and St Pierre). 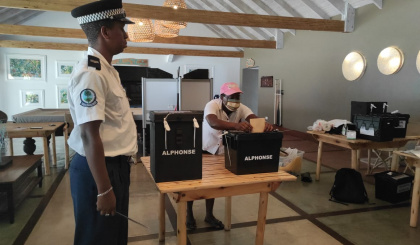