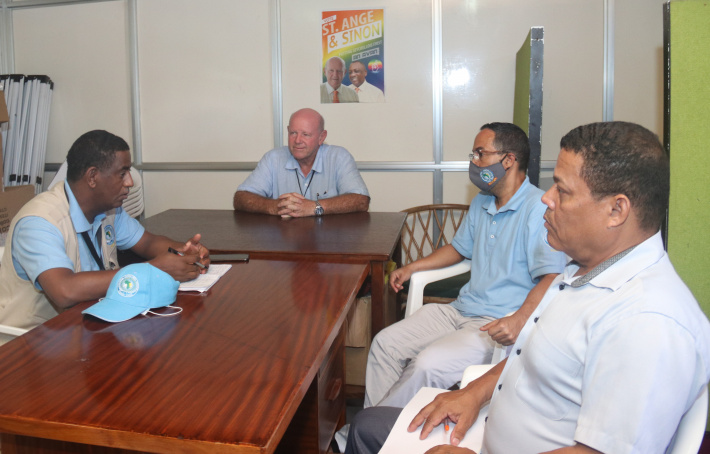 The meeting took place at the One Seychelles party headquarters, 1st floor, Bodco building, New Port. The aim of the meeting was for the East African Standby Force (EASF) to make known to One Seychelles of its presence and obligation in the country with regards to the presidential and National Assembly elections which started yesterday and will end tomorrow, Saturday October 24.

After the meeting, Mr Wassihun said that other than discussing EASF’s presence here to observe the elections, they also took note of issues raised by Mr St Ange. He stated that issues raised included the party not having timely accreditation for its members and the differences he (Mr St Ange) has with the appointment of the electoral commission, among others.

Mr Wassihun said the EASF will look into the issues raised for a comprehensive understanding before coming up with a report at the end of the day. He added that the EASF is here to observe and to record which will then be followed by a report for recommendations for future elections.

With regards to the political campaigning, he said that he was very appreciative of the presidential debate that took place and which showcased a high sense of political maturity. He was accompanied at the meeting by EASF communication manager Jules Hoareau.

In the morning, the EASF delegation also paid a courtesy call on United Seychelles presidential candidate Danny Faure at State House and also held discussions with the Electoral Commission of Seychelles (ECS) and the Citizens Engagement Platform Seychelles (Ceps). It expects to call on a Linyon Demokratik Seselwa (LDS) representative today.