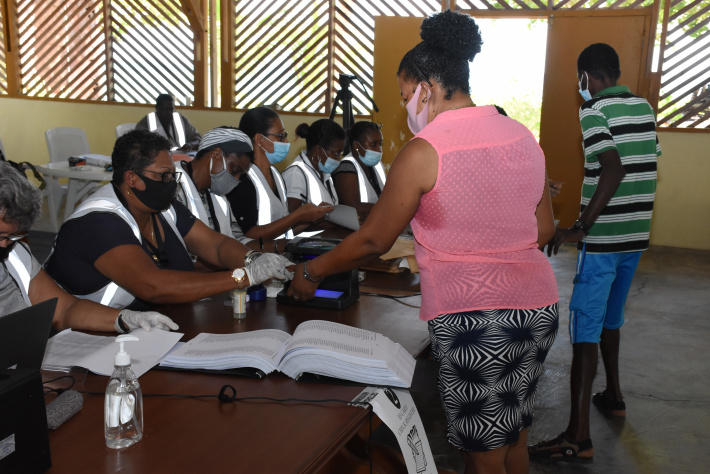 Going through the formalities before voting (Photo: Louis Toussaint)

A total of 138 registered voters cast their votes at the Silhouette all-station in the Silhouette community centre yesterday for the presidential and National Assembly elections.

Voting at the polling station started around 5 minutes after nine following procedures such as counting of blank ballots, swearing in of officials and, exhibition and sealing of empty ballot boxes. The station closed at approximately 1.05pm.

Around 135 voters featured on the station’s special list and these were people either residing or working on Silhouette and North Island. These included employees of the Island Conservation Society (ICS), Islands Development Company (IDC) and Hilton Labriz Resort.

With Silhouette being considered as an all-station, where anyone who was on the island yesterday could exercise their right to vote, some 40 additional persons voted. These were party representatives, election observers, Electoral Commission (EC) officials, police officers guarding the station, media personnel covering the event among others.

Electoral officer in charge of the Silhouette station, Justin Mathiot, said that the process went well, noting that the officials did not encounter any problems and voting flowed smoothly as expected.

“Even if Silhouette falls under Inner Islands, Silhouette is an all-station so anybody living in any district can vote here as long as their name appear on the master register. Hence it is important that when these people vote, the ballot is placed in an envelope on which we write the district in which they are registered. These boxes will be sent to the headquarters where they are going to sort out the envelopes on Friday evening according to the districts the people are registered in,” explained Mr Mathiot.

Subsequently, these envelopes and lists of persons who voted will be sent to the respective districts to be counted and consolidated on Saturday morning before stations open, to ensure that those who cast their vote on Silhouette cannot vote again.

Voters were able to first cast their vote for the presidential election, which was sealed in envelopes with their district name written on them, and they had to repeat the same process for their National Assembly votes.

First in line to vote for the general elections at the special station was 81-year-old Modestine Magnan, the oldest resident on Silhouette.

Mrs Magnan noted that she was well informed of the candidates participating in the election prior to casting her vote yesterday.

“We do not know how the election will pan out but we pray everything will be alright,” provide Mrs Magnan.

Forty-year-old David Johnny expressed the same sentiment about having received sufficient details about the candidates to inform his choices while voting yesterday.

He noted that some of the political parties came to Silhouette during the campaigning period to engage with the electorate on the island.

“The procedures have gone quite well and fast. There were some precautionary measures that we had to take due to Covid-19 but everything went well,” said Mr Johnny.

Dyllis Pouponneau, 24, said that her voting experience at Silhouette was comparatively different from voting at Grand Anse Praslin, the district in which she is registered.

“It takes much less time here. If I had gone to Praslin, I would have had to pay for a ticket and wait in a longer queue so it’s much easier here,” said the young conservationist.

Presidential candidate for One Seychelles, Alain St Ange, was present from the moment the EC set up the station early yesterday morning up to around 10.30am.

“People were lined up to vote early in the morning which is amazing for an island where there are not a lot of voters. Voting inside seemed a little bit longer because they had to cast their votes in envelopes first for presidential then National Assembly[…] I am satisfied that Silhouette was able to conduct this exercise efficiently to allow people to exercise their right,” said Mr St Ange.

“The procedures were well organised. I would like to congratulate the Electoral Commission for placing a professional team here that verified all that were necessary; face masks, names. It was a bit more complicated than on Mahé because people do not have to vote in an envelope on Mahé but it went quite fast in a calm atmosphere,” said Mr Afif.

“The procedures went well and allowed people to exercise their Constitutional right in peace, security and order. I am satisfied with the way things went,” said Mr Meriton.

Both local and international observers as well as polling agents representing LDS and US were present at the Silhouette polling station. 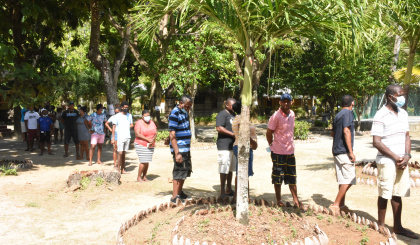 Voters queueing up to cast their votes on Sihouette (Photo: Louis Toussaint)